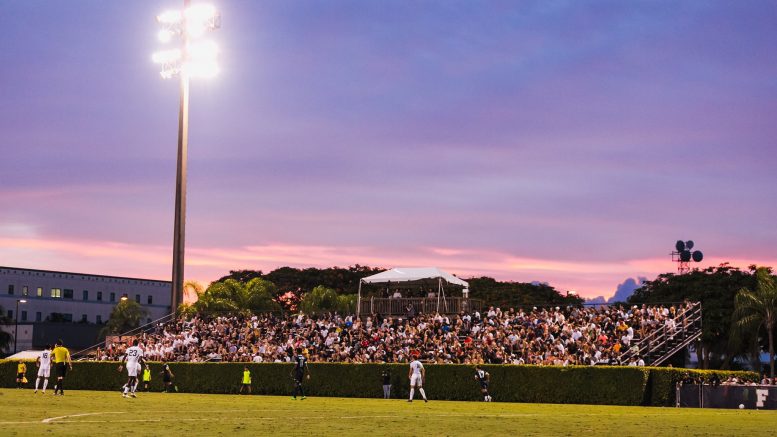 With midterms around the corner, it’s time to study and reflect on what we’ve learned so far in the fall FIU Athletics season. Here’s the midseason study guide for the three fall sports hitting the midterm mark.

For the FIU football team, looking ahead is the only option.

After a 38-37 thrilling win over Bryant University to kick off the season, FIU finds itself in a hole after three games.

Following the opening victory, FIU flew to San Marcos, Texas, to take on the Texas State Bobcats, which saw the team give up 452 total yards of offense to the Bobcats in a 41-12 loss.

Following a bye week, this past Saturday, the Blue and Gold hit the road to Bowling Green, Kentucky for conference action against Western Kentucky, losing 73-0, the worst loss in program history.

FIU gave up 688 yards of offense, including 42 points in the first half alone, which is tied for second most points allowed in a first half in school history.

The offense could not get rolling as FIU starting quarterback Grayson James was 13-for-23 for 85 yards passing, while FIU had only 56 yards on the ground.

However, head coach Mike MacIntyre still is optimistic about his team.

“We’re all passionate, but the other word is you have to have perseverance,” MacIntyre said in his press conference after the loss to Western Kentucky.

Through three games, the team has given up 151 points and allowed 50.3 points per game. On the offensive side, it has been a process to get the team up and running the past two games, averaging 246.5 total offensive yards.

Yet there have been positives early in the season. On the defensive side, both linebackers Donovan Manuel and Gaethan Bernadel have shined, combining for 46 tackles.

“I don’t want to give up anything,” Manuel said to media before the Western Kentucky game. “But we do need to do a better job of fitting the run. I take pride in that, and, if we can do that, we can make opponents one-dimensional.”

For the struggling offense, receiver Tyrese Chambers has been a bright spot. Leading the team with 19 receptions and 175 receiving yards with two touchdowns. Chambers only had one catch for 17 yards against Western Kentucky and spoke about some of the difficulties he’s faced from opposing defenses early in the season.

“Just finding different ways to get open and help my teammates. I have been in triple, double coverages before, but we just have to find ways protect and move around in different place,” Chambers said.

FIU will look to get back on the winning side this upcoming Saturday as they head to Las Cruces to take on the New Mexico State Aggies before returning to Miami for homecoming against UConn on Oct 8.

The challenge ahead of the new FIU coaching staff is mountainous and for this team to climb its way out of the spot they currently find themselves in, signs of improvement will be a necessity as the season rolls on.

The offensive line is the key area that needs improvement. Without the time to get a throw off, Panthers QB’s will spend more time running from opposing linebackers than throwing strikes to their receivers.

Defensively FIU needs to cut down on the big plays of opposing teams. On too many occasions the Panthers have missed tackles that could stop threating opportunities from opposing offenses.

It’s going to be a process for MacIntrye, but the timeline for the rebuild is still unknown. One of the youngest teams in all of college football, FIU has a lot of work to do to get back into bowl game contention. Time will tell if the Panthers can shed the label as one of the worst teams in college football and finally realize the potential that the program has.

With a record of 5-3, the FIU men’s soccer team has navigated the eighth hardest schedule in the nation with cautious confidence. Three of the Panthers’ five wins come against ranked opponents, with all three losses coming against teams that at least were receiving top 25 votes.

At times this season the Panthers have looked unstoppable, but in other instances there is a slight shakiness that you expect from a young team.

Coming off a season with only two regular-season losses some might view already having three losses as a step backward, but the three programs FIU have lost to are all threats to make a deep run into the NCAA Tournament, just like the Panthers.

“When the NCAA Tournament comes around I want to be a part of it, and I want to see a lot of familiar faces,” Russell said following the Panthers win against UNF about constructing this season’s schedule.

The Panthers have played some real quality football this season led by notable performances from David Garcia, Kevin Harr and Stephen Afrifa. The trio have been key figures in Kyle Russell’s team as they build a case to be a title threat.

Joining the American Athletic Conference, FIU sent a statement to the conference by dominating defending champions and No. 10 Tulsa 3-0 in the AAC opener. Afrifa snatched a brace and made the field his playground in the Panthers’ best performance of the season.

“We recruit the best because we expect to be the best, and we want to schedule the best so we play against them throughout the fall,” Russell said about his squad following the Tulsa game. “So for us, this is what you came here for, this is why we as a staff are here and this is why we train as hard as we do.”

The following match, however, was just the opposite.

Traveling to Dallas, Texas, FIU took on the SMU Mustangs in their second conference matchup, losing 6-4. Even with a gritty and impressive comeback attempt in the second half, the damage done in the first half by the Mustangs proved to be enough to keep the Panthers in their cage.

The first half of the game was the lowest moment of the season for FIU so far, but even then, they nearly dragged themselves off the canvas and landed a few jabs before falling short of the knockout blow.

The Mustangs are one of the country’s top teams and a threat to win the AAC, so the loss should not send any fans into a panic, but the ambivalence in recent performances is something to keep note of.

The expectations for FIU remain unchanged. This program is extraordinarily talented and will challenge for the conference title and should make some noise in the NCAA tournament.  Expect the Panthers to finish the season with a flurry of victories in conference play and maybe even a title.

Just over halfway into their season, the FIU women’s soccer team sit at 2-5-2 as they continue their program rebuild under head coach Jonathan Garbar. Three of the five losses finished with a one goal margin of defeat.

The two wins match their win total from last season and the Panthers will likely eclipse that total with six games remaining. One of conference USA’s youngest squads, Garbar has expressed his admiration for his youthful team’s performance this season while holding them to a high standard.

“We’re very, very excited about how our style and our system has been developing throughout the course of the season as such a young team and so early on,” Garbar said following the draw with UTSA.

The performances of Nikole Solis, Dominique Marcelli, and Ithaisa Vinoly have spurred the Panthers in a positive direction at times this season. Solis opened the year on a hot streak, scoring five goals in three games, including a hattrick against Southern University. Despite cooling down a bit in recent weeks on the scoring front, she’s still one of the most impactful players for FIU.

Marcelli and Vinoly have quietly been two of the key figures for the Panthers this season. With Marcelli pulling the strings from a deeper position as a defensive midfielder, her passing has unlocked multiple opposing defenses and created goal scoring chances. Vinoly has made several impressive saves so far, keeping FIU from conceding more than their current total of 15.

With a rebuilding program patience is always needed, this season should serve as the experience that a young squad needs and could push them to take a step forward next year. Attempting to claw themselves up from the bottom of C-USA, the Panthers need to finish conference play with momentum and confidence.

“One of the things I love about our group is that we hold ourselves to a very high standard, we’re very clear on what we want to do,” Garbar said. “We don’t let our anger or frustration manifest itself into self-pity or finger pointing. We’re just going to make sure we go back and do one of the things we love to do most, and that’s analyze and figure out where we can be better.”

The 3-0 loss to Rice, one of the conference’s best programs, shows that FIU still has growing pains to work out before competing with the top end of C-USA. But with a squad full of promising youth players, the potential path forward for the Panthers could be bright. The clock is ticking for FIU, with next season being the true test of where the squad is truly at.