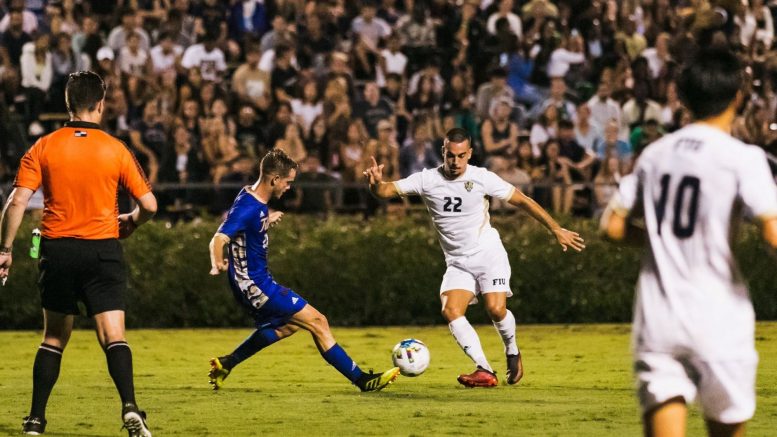 Julien Gastaldy dancing around a defender vs Tulsa. (Photo by FIU Athletics)

The FIU men’s soccer team hosted another fierce competitor in the American Athletic Conference on Saturday, Oct 1, taking on the No. 22 ranked Memphis Tigers.

A game full of highs and lows, the contest showed just how deep the Panthers are willing to dig to get the victory.

The first 25 minutes of play was a feeling-out process for both teams with neither gaining a significant edge over the other. In the 27th minute, Yushi Nagao found enough space in the open field to take a long shot and score from outside the box.

After a first half with very little offensive play, the second half had everyone from the fans in the stands to the FIU supporters streaming the match, on their feet.

The Panthers and the Tigers started hot off the whistle, trading two shots a piece within the first five minutes of the second half.

After a wild scramble at the edge of the Panther’s 18-yard box, a Memphis player found a chance to score and sent his strike looping over FIU keeper Matt Levy for the Tiger’s first goal of the game.

With the score tied 1-1 in the 51st minute, FIU pushed forward, forcing Memphis to drop their team back behind the halfway line.

After several shots on goal and drawing fouls, Memphis was down a man after a player received his second yellow card and was forced to leave the game.

Despite the offensive onslaught, the Tigers managed to perform a well-executed counterattack and caught the Panthers off guard. Memphis drew a foul inside the box and were awarded a penalty, which they scored, making the score 2-1.

This would only fuel FIU to attack the Memphis backline even harder.

With 7 minutes left in the game, Philip Hildebrandt found Joao Domingues at the back post and the Portuguese slotted it past the keeper to get the Panthers level at 2-2.

It felt like a comeback was destined to happen, the Panthers shot a whooping 12 times at goal in the second half alone.

In the 88th minute, Stephen Afrifa danced into the box and was tripped on his way to make a shot. The referee blew his whistle right away and pointed at the penalty spot. Afrifa was one on one with the goalie, with a shot to secure the win for the Panthers.

Afrifa took his shot but it was blocked by the Memphis keeper. The ball found its way to the foot of none other than Bernardo Dos Santos Monteiro and he smashed the ball into the back of the net; 3-2, Panther led with just over 60 seconds remaining.

The final whistle blew and FIU claimed another victory over a ranked opponent. Coach Kyle Russell was seen running straight to Dos Santos after the game.

“So proud of Bernardo because he was freshman of the year last year and had tons of success,” Russell said when asked about his reaction. “This year, he’s a targeted man and so he hasn’t gotten a goal this year.”

“It was awesome to see him score, I ran straight to him because I was just so overwhelmed with joy for him. His mom flew in from Portugal to watch him play yesterday. So it was like a perfect storm.”

In regards to the team’s win, Russell emphasized the importance of responding after losses.

“So we’ve been able to respond after losses. We responded against VCU and got the win. Now, can you be consistent and can you execute our principles at a high level?” Russell said. “No matter what happens, get the result and that’s what these guys did.”

The Panther’s maturity after conceding a goal was also a highlight for Russell.

“This is the first time I have seen our guys give up a goal and respond positively and not put their heads down,” Russell said with a wide smile. “So that was super encouraging for me as a coach. I’m like a little proud father right now of my 27 players.”

FIU looks to continue its two-game win streak on the road as they travel to Philadelphia to play Temple University on Wednesday, Oct 5.