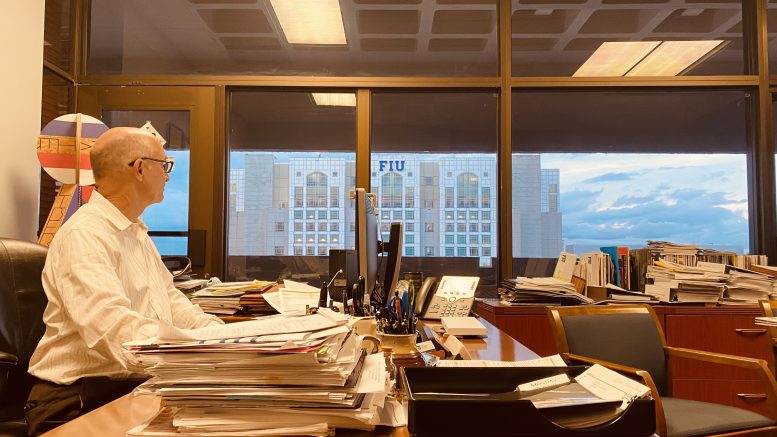 Interim President Kenneth A. Jessel sitting in his office in Primera Casa. Photo via FIU Flickr.

Months after the stunning resignation of former university president Mark B. Rosenberg in January, a university-wide email on Tuesday announced one of the final stages in naming FIU’s sixth president.

The Presidential Search Committee’s “community sessions” will take place in the Graham Center Ballrooms on the Modesto Maidique Campus next week, allowing students, faculty and members of the community to interact with the Committee’s recommendation for the position: Interim President Kenneth A. Jessell.

Offering both in-person and virtual attendance over the two-day span, the full transcripts of each session will be provided to the Board of Trustees at their Oct 19 meeting, where they will consider Jessell’s candidacy.

According to the email, questions for Jessell may be submitted anonymously.

The news follows an announcement by the Board of Trustees two weeks ago that Jessell – who has served as Interim President since the resignation nine months ago – was advanced as the Presidential Search Committee’s sole recommendation.

That, according to an email at the time from BOT chair Roger Tovar, was because all other finalists for the presidency requested they be the lone candidate or removed from contention entirely.

A bill signed into law during this year’s state legislative session introduced broad changes to the process of recruiting and hiring presidents throughout Florida’s public university and state college system.

Where information such as a candidate’s name was previously considered public information from the moment they applied for the role, SB 250 instead classifies any identifiable information of candidates as private until a group of finalists has been decided.

Following that is a 21-day public comment period, which began the day after Jessell’s announcement as the lone candidate on Sep 22.

The schedule for the community sessions can be found below.