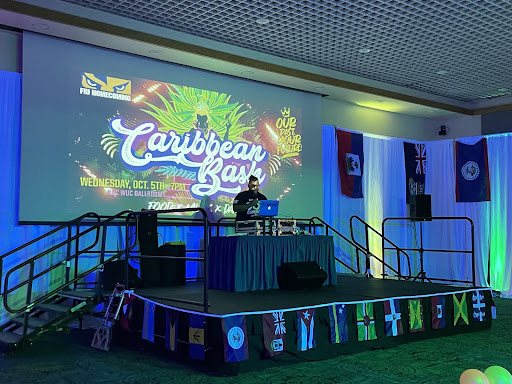 Planned by the Homecoming Council, this event showcased Caribbean culture through music, dance, food, and beloved pastimes. Attendees could also take pictures at a photo booth and pick up FIU cultural club merchandise.

As the night went on, DJ Redwood called students up to volunteer for dance battles. Attendees showcased their moves, dancing against and with each other, to win the most cheers.

Throughout the night, students raised flags from their countries and waved them to the rhythm of the music.

Sophomore Chelsea Matthews, a biology major, brought her Trinidad and Tobago flag, draping it over her shoulders as she enjoyed the night.

“I really enjoyed the versatility of the music,” said Matthews about the DJ’s chosen tracklist. “He really played music from every island, and that’s rare.”

After having fun on the dance floor, attendees could grab a bite of Caribbean food staples. Selections included plantain chips, Cuban sandwiches, patties and pastries with various vegan fillings, flan, and sugar cookies.

Attendees could also sit down at several tables in the ballroom and play a round of dominoes, a game typically enjoyed during Caribbean family reunions.

Throughout the night, there were plenty of other activities for attendees to enjoy, such as a photo booth, and a glitter make-up station, which all celebrated Caribbean culture.

After attendees chose a set of jewels, the make-up artist carefully applied them in a style typically done for Caribbean carnivals.

“I think this event makes everyone feel noticed, in a way,” said Curton, “since FIU is located in an area where you can always find someone from your country.”

FIU clubs like the Jamaican Student Union and the Homecoming Council members set up stations in the ballrooms. They provided merchandise, such as small light-up fans, shirts, hats, and towels, and encouraged students to follow their Instagram pages.

Curton elaborated on the process of organizing the Caribbean Bash, from calling vendors to assuring that all Caribbean countries were sufficiently represented.

“I felt it was a nice touch to find flags for all twenty-six Caribbean countries,” said Curton. “We just wanted everyone to feel seen and heard.”

While fun, Homecoming week is an intense and stressful time. With the Homecoming game and more events on the horizon, both students and the Homecoming Council had much to forward look to.

Curton commented that this event allowed members and students to relax before the week went on.

“This was a way to appreciate the Caribbean diaspora in a celebration,” said Curton. “It’s a very nice way to let go and just dance.”

Football players gear up for the real life as adults, parents