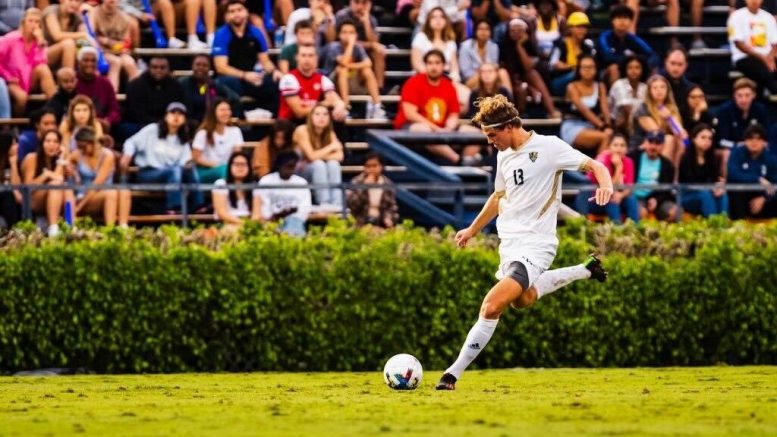 Philip Hildebrandt sends in a cross versus UCF. (Photo by FIU Athletics.)

The FIU men’s soccer team had a busy week, playing two games in four days, winning one and dropping the other.

The Panthers traveled to Philadelphia on Wednesday, Oct. 5, for an AAC showdown against the Temple Owls. Winning that game 3-0, FIU returned to Miami on Oct. 9 to face state rivals, UCF, losing 3-1.

After two close calls for the Panthers backline in the first 10 minutes against Temple, FIU kept their cool and managed to strike first with a long range goal from Bernardo Dos Santos Monteiro.

Carlos Sheckermann intercepted a clearance from the Owl’s defense and passed it off to Dos Santos who shook off two defenders before sending a looping shot over the Temple goalie for the game’s first goal.

FIU executed a high press, making it difficult for Temple to get a rhythm going. The pressure was too much to handle as the first half ended with the Panthers on top, 1-0.

The second half kicked-off with FIU going all out on offense. In the 58th minute, Dos Santos ran down the left wing, beat one defender, and made his way into the box but was taken down by a Temple defender. FIU was awarded a penalty that Dos Santos converted, 2-0 FIU.

After a slow start to the season, Dos Santos seems to be regaining his goal scoring confidence.

Temple wasn’t given any room to create opportunities as FIU’s pressure was too much to handle. As for the Panthers, it was smooth sailing all around. The defense was composed, Matt Levy was confident in goal, and the Panther offense was a well-oiled machine. The game ended 3-0 in favor of FIU.

The Panthers returned to Miami in hopes to continue their winning streak on Oct. 9th, facing off against the UCF Knights.

FIU began the game by applying quick pressure on the UCF defense, shooting five shots in the first 15 minutes of the game. It was clear that FIU were the aggressors, but it was evident that UCF were focusing more on counterattacking.

In the 25th minute, the Knights found an opportunity inside the box to draw a foul and were awarded a penalty kick. UCF converted the penalty, the score was now 1-0 Knights.

This did not stop the Panthers from attacking. The offensive onslaught generated a total of 15 shots in the first half alone for FIU compared to UCF’s eight.

The Panthers finally got their breakthrough as Philip Hildebrandt scored his first goal of the season in the 34th minute. Hildebrandt found his chance from outside the box and ripped it into the bottom corner of the goal past the UCF keeper.

The high tempo offense of the Panthers pushed the Knights to defend for most of the first half, but just before the whistle blew for halftime, the Knights scored in the 44th minute after a scrum for the ball inside FIU territory.

The second half was quite like the first; FIU was on attack mode whilst UCF would patiently wait for a chance to go on the counterattack.

After several close shots and no conversions, the Knights yet again found themselves blazing towards an off guard FIU backline and scored their third goal of the game in the 77th minute.

The final score read 3-1 in favor of the Knights. The Panthers outshot the Knights, 23-11 and this physical game had a total of 29 fouls and 13 yellow cards. Stephen Afrifa, Dos Santos, and Alves had four shots each while Rasmus Tobinski had all three of his shots on goal.

“Statistically we were really good in a lot of areas, but not in the final third,” Russell said. “Our guys always bounce back after loses and we’ll have a great week of training ahead of USF.”

FIU travel to Tampa on Oct. 16, facing another state rival, the University of South Florida Bulls. The Panthers have a 2-3-1 record all time against the Bulls and tied their last matchup in 2019 2-2.