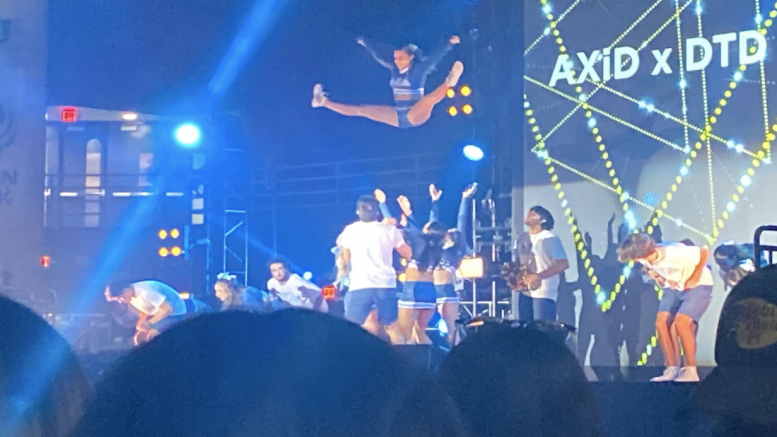 Panther pride beamed all over the Ocean Bank Convocation Center at Panther’s Got Talent, a homecoming event that exhibited the passionate students at FIU.

With group and solo performances, attendees cheered and danced throughout the event. Presenters Kandys Sosa and Nelson Barahona, executive committee members of the FIU Young Alumni Network, made sure to hype up the crowd.

The performances began with a collaboration from Phi Mu and Sigma Alpha Mu. The mashup included songs that made the crowd dance in their seats such as “Guachineo” by Chocolate MC and “El Apagón” by Bad Bunny.

Preparation for the event began as early as the beginning of the semester. Greek life began banding together and producing their routines to create what would become the finished product.

“We started rehearsing the second week of this fall semester. We decided to join together with Delta Phi Epsilon,” said nursing major Nicholas Pita, member of Beta Theta Pi. “It was a lot of fun to prepare and perform.”

Later in the night, singer Rolando Casas performed an original song. Everyone in the crowd stood and danced along to his reggaeton number.

Near the end of the night, the presenters challenged attendees to a freeze dance competition, with students swaying and stopping to  “Titi Me Pregunto” by Bad Bunny.

The night was not without its favorites.

“My favorite was the performance from Delta Phi and Beta Theta Pi. I loved their energy and how well-choreographed it was,” said political science major Estef Cuellar.

“I loved Delta Phi and Beta. I especially liked how they incorporated music and dances from different genres,” said hospitality major Lexy Hernandez.

To finish off the night, the Prestige Dance Troupe performed a mash-up of music the audience was familiar with, including songs like “Blessed” by GloRilla and “Act Up” by Day Day Sustaaa.

After the performances concluded, four judges decided the winners of the show in three categories: Solo, Blue, and Gold. The Solo award was given to the best solo performer. The Blue award went to the performers who separated themselves from the big groups yet stood out together. The Gold award was given to the group the judges felt were superior to the rest. Judges looked for creativity, FIU spirit, and the overall level of talent of performers.

As the first place winner of the Solo award, Rachel Savino proudly held up her trophy after enchanting the crowd with her melodies. The Dynamic Duo sang to first place for the Blue award. The Champions lived up to their name as they took home the first place trophy for the Gold award.

Plastic Pinks on growth of garage rock scene in Miami

Every month should be Black History Month

FIU Beach Volleyball Goes Undefeated at the Start of the Season