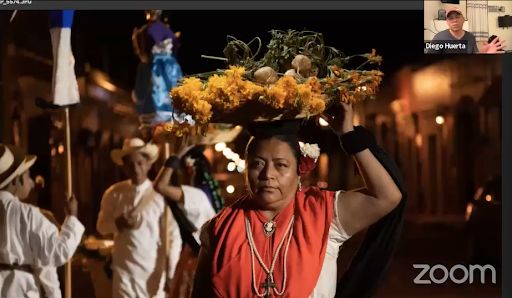 Huerta shows a behind-the-scenes snapshot of a project in a Mexican indigenous community.

Joined by the Kuyayky Foundation, a nonprofit organization that aims to showcase and promote Andean indigenous culture through music, the event featured artists from native Central American and South American communities who shared their artwork and discussed indigenous identity in a changing world.

Candy Hurtado-Bonilla, a member of the Kuyayky Foundation, welcomed attendees with a reflection on the Dia de la Raza celebration.

“We’d like to celebrate by reflecting on everything we have lived through in Latin America,” said Hurtado-Bonilla, “so indigenous people can keep making spaces to be creative, and establish dialogues.”

Founded by the Hurtado family in their native Peru, the foundation’s efforts continued in the United States after they emigrated to Miami.

Guests discussed how indigenous communities can be better represented in creative spaces, especially as harmful beliefs established by colonization are dismantled. One such belief is the racial categorization of “mestizo,” or mixed.

“It’s not about fighting with anyone, or about the idea of being mestizo, which has historically been used to erase our identities,” said Hurtado-Bonilla, “but rather about recognizing our strong roots all over different native communities.”

The first guest to speak was Carlos Orozco, a sculptor from the Huave community in Oaxaca, Mexico. Orozco’s project – Puech Ikots – aims to educate about indigenous culture through art and provide Oaxacan artists with opportunities to profit from their work.

“We created this project to diffuse our Oaxacan culture and tradition,” said Orozco, “but also to help artists who are in Oaxaca’s impoverished regions who may not have a platform for their work otherwise.”

Photographer Diego Huerta, whose work has previously been featured in National Geographic, traveled throughout Mexico to share indigenous communities’ experiences through documentaries and photo albums.

Huerta commented on how issues affecting indigenous groups have gone easily unnoticed, and how continuing conversations on these issues is essential. He also reflected on the importance of preserving traditional values in indigenous communities.

“For example, in the U.S. we talk about going back to eating organic foods, and that costs a lot,” said Huerta. “Whereas when you go to a pueblo [community] and eat a recently picked piece of elote , and it tastes like glory, you wonder: are they poor, or am I the poor one?”

This was coupled with the announcement of an upcoming cinematic project centered on honoring the ancestral legacy of the Hurtado family’s hometown in Yauyos, located in Jauja, Peru.

All the guests stressed the importance of encouraging younger generations to raise awareness of native communities, especially in online spaces.

However, the invited artists also hoped that the beauty and resilience of indigenous cultures are doubly recognized by a wider audience.

“When stories about tragedy, misery, and disaster win all the prizes, it’s hard to show beauty,” said Huerta. “But it’s important to keep showing that side of humanity. It sets a precedent of who we are, and who we want to be.”