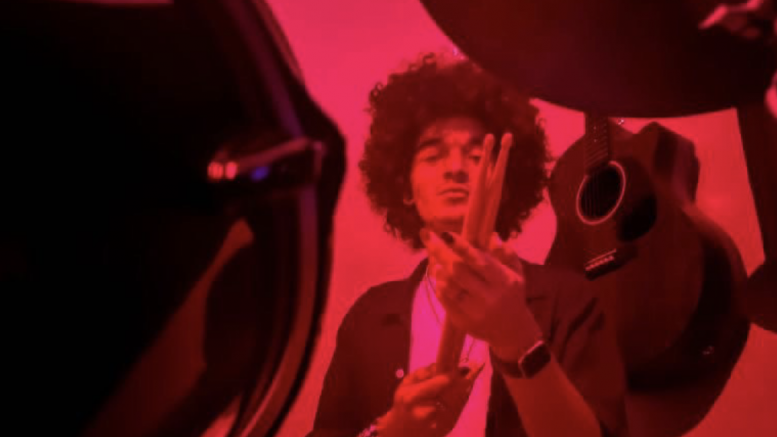 A deep connection for music shared between four strangers formed a strong bond allowing them to vibe and express their passions with one another. The Varos have songs that they are currently working on and plan to release throughout the next couple of months.

Three out of the four members are FIU students. Torres and Iglesias are currently sophomores and Hernandez is in his junior year.

The band members have their own stage names. Torres, goes by “Time-Check,” Iglesias goes by “KRØW,” Hernandez goes by the name of “Shibaro,” and Garcia De Lemos is also known as “Van.”

The band rehearses and records their songs twice a week at Hernandez’s house. With a main focus on indie, they described their genre as a mix of all types of sounds.

“We have a mix of so many different genres, we have what I bring with rap, what Robin brings with rock, what Van brings with Jazz and what Omar brings with all the funky tunes he is currently making,” said Torres.

With these tunes, their goal is to allow others to take personal messages from their songs and for fans to relate to them.

“I think we would really want fans to take away personal messages from our songs, for instance when we are writing a song… I want it to relate within all of our lives in some way,” said Torres.

The band has not had their first live performance yet, but are forming a bigger discography of songs to come out soon so that fans have more to listen to.

“We definitely want to have a live performance, so we are hoping to have more content out there before that happens,” said Torres.

Being a performer comes with a lot of inspiration, memories as well as worry. But The Varos is more than a band, and their friendship is its own artistry.

“There are a lot of times where we just go grab some Taco Bell and we just get to talk, rewind, laugh and connect with one another. That has to be one of our favorite memories,” said Torres.

Putting themselves out there artistically led to many setbacks and bullying, however.

“I think with me personally there was a lot of back and forth with music because when I put myself out there it led to a lot of bullying and cyber-bullying from a lot of people around me,” said Torres. “Maybe I did feel discouraged for a bit, but music has always kind of been there and I just really want to do this.”

But the band has gained sufficient confidence to continue to pursue their desires. Most of the band study different majors, but they want to remain persistent in constructing their love for music.

“I’ve always had this dream about becoming an artist, making music is all I’ve ever wanted,” said Torres. “We all want the band to get somewhere someday and to be successful, it really means a lot to all of us.”

The Varos are currently working on new songs that will be coming out throughout the next few months. They will be released on Spotify, Apple Music and SoundCloud. To find out more information about the band their Instagram is @thevaros_.

“As a band we really want fans to know that they can do this themselves, if you really want to do something – just do it,” said Torres.

At the Bay, Entertainment, Sports