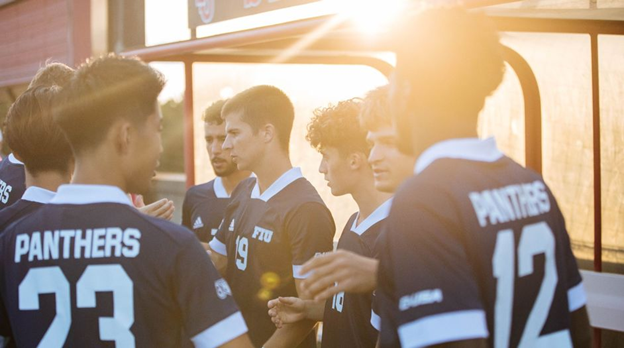 The FIU Panthers going over the game plan one more time before hitting the field against USF. Photo by FIU Athletics.

The teams wasted no time putting points on the board. The Panthers were awarded a penalty after a foul inside the box in the fourth minute of play. Yushi Nagao converted the penalty for his third goal of the season.

In that same minute, USF scored a cheeky bicycle kick goal to level the score.

FIU continued to push forward and threaten the USF defense. In the 31st minute, the Panthers managed to find their second goal. Fumiya Shiraishi dribbled through the Bull’s defense and found Stephen Afrifa open for the shot.

The Panthers held the lead for eight minutes, their longest lead of the game. UCF tied the game in the 39th minute. The halftime whistle blew with the score 2-2.

The second half started slower than the first but just as physical. In the 65th minute, USF found themselves down a man after a red card was shown to a player after having received a yellow card 10 minutes earlier.

In the 79th minute, Bernardo Dos Santos Monteiro found an opportunity to make the pass off to Afrifa, scoring his second goal of the game. With his seventh goal of the season, Afrifa put the Panthers up by one with 11 minutes remaining.

But FIU didn’t get a chance to get settled in as USF marched down the field and tied the game once again, ending with FIU locked with USF, 3-3. The Panthers outshot the Bulls 21-9.

FIU returns to Miami to take on the UAB Blazers on Saturday, October 22nd.