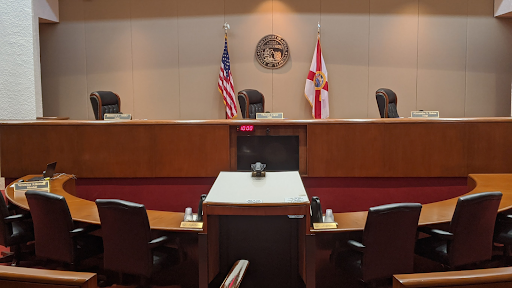 Attorneys presented oral arguments at the Third District Court of Appeals last week in the case that will settle a dispute over FIU’s collection of student fees for services inaccessible to students during COVID-19 related shutdowns two years ago.

The Oct 11 hearing tasked judges with deciding whether to strike down a previous circuit court ruling that classified the case as a class-action suit – a decision in favor of students – or to uphold it.

Potential impacts of the ruling affect students who were enrolled during the 2020 academic term, and the case could possibly result in refunds of up to $10 million, according to Adam Moskowitz, whose firm is representing students in the case.

The three-judge panel also heard arguments from Matthew Lines, who is representing the university.

At the time of publication, Lines’ office said he was unavailable for comment.

Shortly after the case was filed in April 2021 by then-students Rebecca Alexandre and Sarah Fagundez, the university quickly filed a motion to have it dismissed. Miami-Dade Circuit Court Judge William Thomas denied that motion and certified the case as a class-action lawsuit.

A class-action suit means that while only two students are suing the university, the case is being tried on behalf of all FIU students enrolled in 2020.

Health, athletic and transportation fees are at the heart of the suit.

Students argue that because services funded by these fees – such as recreation centers, on-campus clinics and transportation and parking – were barred or partially unavailable during COVID-19 lockdowns, refunds should be provided.

The university’s argument has centered on the claim that they’re unable to be sued because of sovereign immunity, a legal concept that limits cases where an institution or individual can be sued due to its status as an entity of the state government.

However, in a 27-page order, Judge Thomas said he would not dismiss the case on those grounds because he believed FIU bypassed sovereign immunity by entering into a clear agreement with students.

Lines asserted in the hearing that his sovereign immunity argument was valid, denying that an express contract of the sort even exists and claiming instead that an implied contractual right was “not enough” to make a case against the university.

However, Judge Logue was direct in his questioning of Lines’ argument.

“Why are the kids paying?” Logue asked. “They think they’re getting something.”

In terms of official documents, Lines cited a 2019 FIU regulation establishing that tuition and fee refunds are only granted in certain circumstances.

The regulation’s relevance to this case lies in sections two and three, which state that refunds can be requested “on account of other exceptional circumstances beyond the control of the student which preclude a student from completing the grading period,” or “when an error by the University results in an overcharge.”

The university would determine the appropriate refund in the first instance and refund the excess amount in the second.

In his argument, Lines did not discuss the caveat in section two that requires a student be unable to complete the grading period in order to be refunded. He instead focused on how the plaintiffs did not exhaust administrative remedies before turning to the courts in seeking reimbursement.

Judge Miller described some of Lines’ arguments as “hairsplitting”.

“To me, it seems we’re elevating form over substance,” said Miller.

While the terms of any type of contract could be interpreted in different ways, Judge Logue pointed out that a regulation establishing the rules of refunds could itself constitute a type of contract, indicating an understanding of services to be exchanged for fees.

Those terms are what the judges focused on in questioning Moskowitz, asking how they could determine specific guidelines regarding how fees could be spent and where those terms could be found.

“It’s a gray area,” Moskowitz admitted in court. However, he remains confident that a case remains to be made.

This isn’t the only case that Moskowitz, also a law professor at the University of Miami, is handling. He’s filed over 10 cases with other universities for the same complaint and originally intended to file a suit against the state Board of Governors. He instead had to file individual cases for each school.

What made a successful case for students at other universities – and what Moskowitz predicts will make FIU another success story – are the receipts.

“I just think the issue is that clear,” Moskowitz said to PantherNOW in an interview.

Registration statements and invoices all serve as receipts for the money that FIU should pay back to students, Moskowitz argued.

While students at other universities, such as the University of Florida, were ultimately victorious in their cases, a similar suit involving Miami-Dade College was decided in the school’s favor. In that case, Moskowitz said the plaintiffs didn’t have the documents needed to prove there was an agreement for services.

Although the case has now seen the courtroom, Moskowitz predicted it may be a few weeks before a ruling is reached. This would be a comparatively quick turnaround in the full context of the case, which has now lasted more than a year and a half.

Moskowitz hopes that should the Third District Court of Appeals rule in favor of the students, FIU will choose to settle.

“I would hope the school would realize that it’s a waste of money and time,” said Moskowitz. “But they seem to be fighting to the very last day.”