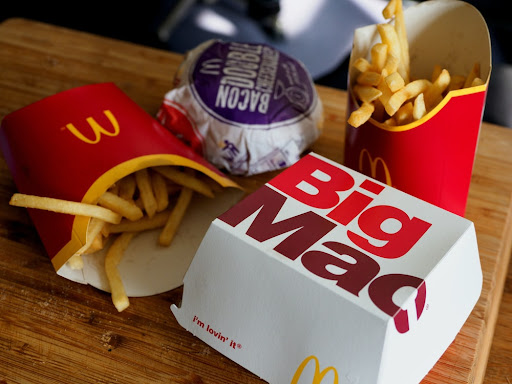 The food we eat, although delicious, is a dangerous environmental polluter.

The food industry has contributed to rising greenhouse gas emissions, animal agriculture and more dangerous environmental factors. It’s a heartbreaking fact considering our natural need for certain foods, but this contribution has undeniably worsened our environment.

The food we eat, from ingredients bought in grocery stores or fast food meals, comes from areas that commonly take dangerous measures in their production. Those containing poultry, fish, or beef — even milk and eggs— involve animal agriculture during production, which refers to the breeding and eventual slaughter of animals for human purposes.

It’s necessary to raise these animals with large amounts of water and land. Shockingly, one-third of the entire world’s water is used solely for food production, as well as 77% of agricultural land.

Studies have proven that, because such a large portion of our planet is being used for such an aggressive and harmful tactic to provide food for humans, changing to a vegan diet could greatly reduce the problem. It helps protect animals and greatly reduces animal agricultural demands and gas emissions from factories that produce and package them.

There are other dangerous factors that contribute to harming our planet. For example, a simple and delicious meal from a good fast food joint can have lasting effects on our environment. It’s based on their carbon footprint, the total greenhouse gas emissions produced by one person or entity.

Dr. Krishnaswamy Jayachandran, an agroecology professor at FIU, comments on these dangers. Food from these restaurants goes through several processes before it goes into your stomach, such as rounding up cows, pigs and chickens into confined animal feeding operations, then packaging in plastic and shipping to your closest fast food restaurant.

“Through confined animal feeding operations, animals grow faster than usual. This produces a lot of methane, which is harmful to the environment,” explained Jayachandran.

Jayachandran also says that the preservatives and added sugars included in our diet have contributed to America’s obesity rate, but it also has the potential to cause sickness, even cancer.

Popular fast food restaurants like McDonald’s started taking action, like reducing unnecessary packaging and using more recyclable materials, around 2019 to start reducing their carbon footprint. Most of them have also set approachable science-based goals, like reducing agriculture, which can guarantee a step closer to a greener future.

While these fast-food restaurants begin making sustainable changes, we must follow suit.

Although we, as people, were brought into this large-scale problem unknowingly, learning more about the relationship between food and climate will help you in the long run make a positive impact on our climate.

Consuming less meat is proven to work. Although it’s recommended, becoming vegan to help the environment is certainly not required, but controlling how much animal-based products you eat and replacing them with crops can be a great way to start. When drastically changing your diet, it’s best to start off slow.

Reducing packaging in any way also works. Making food at home, storing it in Tupperware and taking it to work or school is a safer way of controlling plastic usage, instead of constantly eating out and receiving large amounts of single-use plastic that will end up damaging air and water quality.

It’s unfortunate to be brought into this problem as consumers, but once we understand the environmental problem occurring on our planet, making efforts to fix this problem as soon as we learn about it can help our planet in the long run.

Homecoming is a time for inclusivity, regardless of gender

Homecoming stays true to its origins of sports