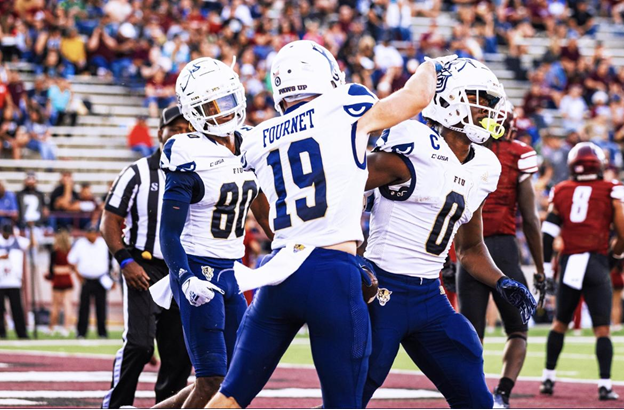 The FIU Panthers celebrating after a touchdown against New Mexico State, (Photo by FIU Athletics)

Coming off their second straight loss, against the defending conference champion UTSA Roadrunners, FIU looks to bounce back as they play the Charlotte 49ers in what is possibly the most important game of the season.

Last time these teams met up, Charlotte came out victorious in a 45-33 game, with FIU scoring 20 in the 4th quarter. Charlotte had FIU’s number throughout the night, connecting on every pass and averaging 6 yards per play.

This year however, things are different for the Panthers, as they bring in fresh players in skill positions and a whole new coaching staff.

Charlotte has the same key players on both offense and defense, but it’s a different game this year as both teams are bottom of the barrel in the conference.

The 49ers have been losing by a small margin in most of their games, but making it high scoring, so they have what it takes to go the distance if needed.

The Panthers have been playing good defense as of late, and offensively have been moving the ball more efficiently down the field, averaging 5.2 yards per play since their 73-0 loss to Western Kentucky.

Despite this, they are last in the conference when it comes to scoring, only scoring 10 points in their two conference games to their opponents 103.

Charlotte is no easy task despite their 1-6 record. Any given Saturday a team that is not expected to win can win, and the Panthers have had that happen to them countless times in the last few seasons.

FIU heads to Charlotte with one goal, to get a win this week.

The Panthers take on the Charlotte 49ers today at 3:30, streaming on ESPN3.