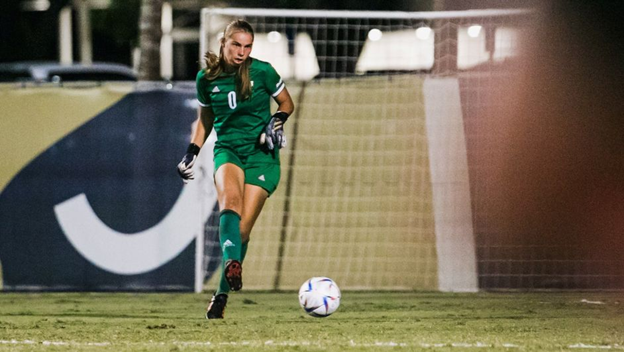 Maaike Van Klink putting the ball back in play versus Charlotte. (Photo by FIU Athletics)

Recording the second-highest save total this season with ten, Maaike Van Klink’s performance was nothing short of spectacular.

The action started early between the sticks for Van Klink, who was starting in goal for the third time this season. A near-costly turnover from the FIU defense allowed Charlotte an opportunity to take the lead in the second minute, but Van Klink blocked the shot.

Charlotte found more success on the offensive end, enabling them to outshoot FIU 11-2 in the first half. Out of those 11, only six were on target; each of those shots were saved or blocked by Van Klink.

Within the first minute of the second half , Van Klink again made a huge save.

The Dutch keeper got into trouble in the 73rd minute after fouling a player inside the box and receiving a yellow card. However, it wasn’t enough to shake Van Klink as she dove left and saved the Panthers from conceding a goal late in the game.

Her stellar performance saw the score end at 0-0 when the final whistle blew. Van Klink was an impenetrable wall in goal as she saved every shot Charlotte had on target.

FIU will travel back to Florida and head to Boca Raton for a rival game against the FAU Owls on Wednesday, Oct. 22nd.