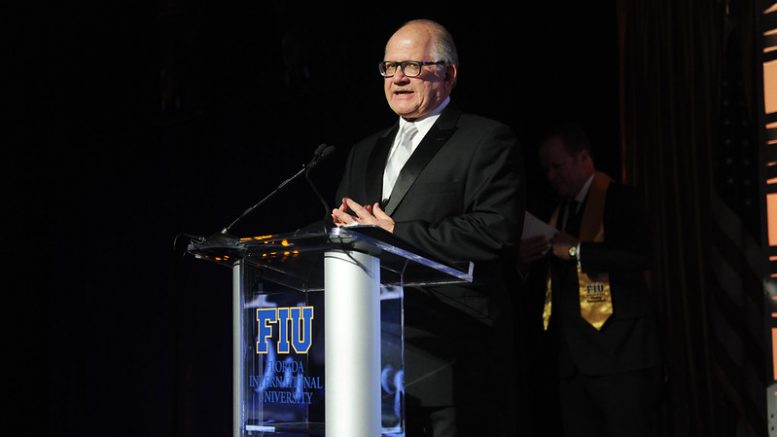 Mark Rosenberg returns to FIU, now as a professor | Via FIU Flickr

The news about Mark B. Rosenberg stepping down as president in January sent ripples through the FIU community.

One wave after another, students, faculty and staff have received the full picture of why Rosenberg is no longer president after 13 years in the role.

Rosenberg’s return to teaching at the university was buried by the news of Kenneth Jessell’s appointment as the university’s sixth president — only nine months after the former president’s resignation for pursuing a relationship with an employee of his office five decades younger than him.

Instead of rewarding an individual who has been part of FIU for decades, administration should have considered the best interests of the students and faculty who truly make FIU and sent the message that integrity is still an ideal at FIU.

Rosenberg’s FIU career began as a professor of politics and international relations in 1976. This time around, however, he’s being paid almost $377,000 – more than twice that of the average tenured School of International and Public Affairs professor.

“I worked for that, and I earned it, and I’m going to continue to earn it,” said Rosenberg in an October interview with the Miami Herald about returning as a professor, co-teaching one international relations course and another.

Teaching two classes during a single semester at that salary isn’t something that’s earned – it’s a participation trophy.

As students, this mindset worries us. People are fallible. However, getting back a position of authority after abusing a previous one is offensive.

The administration’s role in allowing Rosenberg to stay cannot be understated.

The faculty advisory board includes only one former faculty member who was promoted to an administrative position while Rosenberg was still in office.

The remaining votes were cast by several more administrators, two of whom were promoted to their positions in August of this year.

The board also has no website for students, faculty and staff to learn more about its mission and purpose. To determine this, PantherNOW had to reach out to media relations, who did not provide more information before publication.

The only people in the university community who decided on Rosenberg’s return are those who are not directly impacted by the work he’ll do as a professor.

Students and most faculty members, such as the Student Government Association or the Faculty Senate, had no say.

Because several members of the board owe their position to Rosenberg, they cannot escape the stain of owing him in some way.

Perhaps the board thought that the HR sexual harassment training Rosenberg received and will have to repeat annually is enough to mitigate concerns over possible future conduct.

Not so. While people are fallible, they aren’t necessarily ignorant. So long as Rosenberg knew that his workplace relationship was inappropriate, it isn’t a matter of training someone but of his integrity as a leader.

HR training will likely have little effect when it is eclipsed by a lack of real discipline and combined with an abnormally large salary and seemingly endless job security.

Further, it wasn’t solely an inappropriate workplace relationship: it was an abuse of power and a textbook example of harassment.

“Given his position as President of a major educational institution…and the obvious power dynamic that existed in the relationship, the President, at best, displayed extremely poor judgment,” read an independent report months after the resignation.

Allowing his return to the classroom tells students that FIU cares very little about misconduct, and any student who has suffered any kind of sexual abuse, harassment or violence sees a lack of respect from their leaders.

Whether the administration chose to keep Rosenberg as a professor out of the desire to give him another chance or because of their ties to him, the result is the same.

Our university shows that they care more about one person’s job than they do about holding integrity, good leadership and honesty in high regard.

It’s clear: politics takes priority over sending the message that FIU cares about the quality of its leaders and the well-being of the university.

No Rosenberg, you haven’t earned it, but you have 377,000 reasons to think you have.