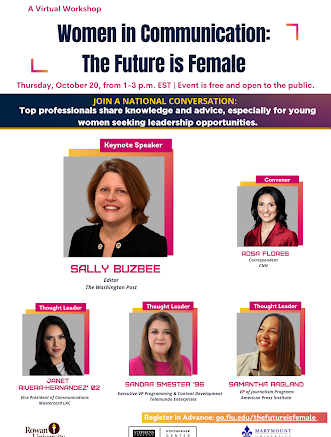 Though Rosa Flores was replaced by Aminda Marqués, the two-hour discussion featured keynote speaker Sally Buzbee and a panel of other notable women in the communication industry. | Flyer Via the Kopenhaver Center

From journalism to public relations, FIU’s Lillian Lodge Kopenhaver Center hosted a panel on Oct. 20 discussing the role of women in the field of communication and how to lead in a fast-paced and diverse sector.

“Women make up more than half the population of the United States,” said School of Journalism and Mass Communications dean emeritus Lillian Lodge Kopenhaver during her opening remarks.

“It is therefore very important that communications in this country represent our population equitably, both in the information that is delivered and those who deliver that information.”

The first hour was led by keynote speaker Sally Buzbee, the first female executive editor of The Washington Post.

Buzbee began the conversation by describing her personal experience in journalism, ranging from a writer to executive editor, emphasizing how the gradual change of leadership in the newsroom is necessary for representation and solidarity between journalists, editors and their audiences.

“I was recently in a story meeting about a very sensitive story that happened to be about abortion…in this case, the reporter was a woman, and the executive editor was a woman, and in this case, we were the only two women in the room,” said Buzbee. “I realized how tough it would have been if I had not been there.”

Buzbee, who previously served as the executive editor, senior vice president, Middle East regional editor and Washington bureau chief of the Associated Press, pointed out that leadership goes beyond diversity and coverage in the workplace.

Whether one’s leadership style comes from gender or background, the core tenet should be about values.

“What are my personal values of leadership?” asked Buzbee.

Also a former executive editor of the Miami Herald and El Nuevo Herald, Marqués jumped in with questions about how to learn more about leadership in communications, where business often gets in the way of leadership training.

“I’m doing this work, working in a team, trying to come up with the best work and that’s actually what we explicitly try to be as managers,” said Buzbee. “That’s not some radical departure from what you’ve been doing.”

For Buzbee, it’s about adding onto the skills that bring a journalist to the editor position, as well as asking for help.

Buzbee added that for women in communication particularly, whatever skills a leader may have – either because of or independent of their gender – that the best work is done by people on equal footing with dedication to their craft.

“Look at what surgeons do: they’re teams of people together, as a unit,” Buzbee said. “I think that’s what journalism should be.”

The second half turned to the other three panelists, Janet Rivera-Hernandez, Sandra Smester, and Samantha Ragland.

Rivera, Vice President of Communications at Mastercard, expanded the conversation to the public relations field, focusing on staying open in the industry, whether it be in career paths or in keeping up with communications resources.

“Stay curious and continue that learning agility, build your skill set and always be adaptable,” said Rivera. “This is not for those who like to stay in the comfort zone; not an option.”

Ragland, vice president of journalism programs at the American Press Institute, built on some of Rivera’s points in building a career that goes beyond just moving up but instead moving toward personal goals.

“You should look at your career like a jungle gym, and not a ladder,” said Ragland. “I would encourage you to think creatively about the way you take on and manage your career.”

For Smester, executive vice president of programming and content development for Telemundo, the difficulties of often being the only woman in a room also provides unique opportunities for success.

“I’m sure all of you have been in a meeting and probably you’re the only lady with men,” Semester said. “I take it as an opportunity to stand out. Be prepared, be ready.”

The panel concludes their time discussing innovation in the newsroom – what it means and how to bring fresh ideas to the table.

“Really it’s just experimenting with new ways to tell your story,” Rivera said. “Not being afraid to fail, having feedback sessions and debriefs and post mortems to understand why it failed and how you can do it differently.”