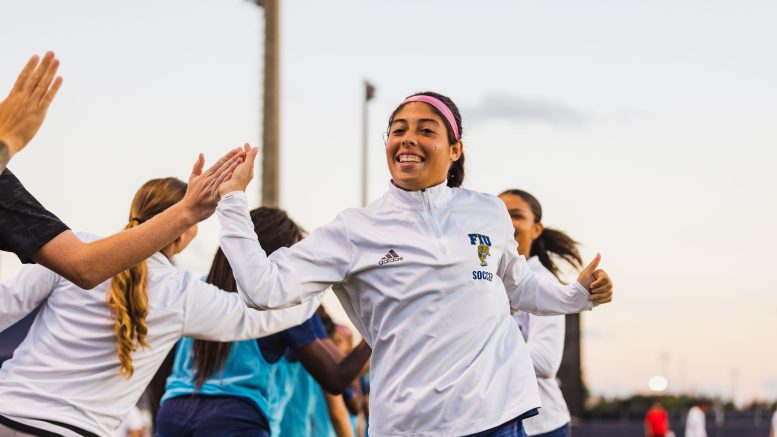 FIU defender Idelys Vazquez before the game with MTSU. (Photo by FIU Athletics)

The FIU Women’s Soccer team wraps up the season with a 3-0 victory against the Middle Tennessee Blue Raiders in a home game at the FIU Soccer Stadium on Saturday, Oct. 29.

The third win of the year, the result assured the squad earned more victories compared to the 2021 season.

The evening started off strong with forward Brealyn Viamille kicking the ball into the net, recording her first FIU goal in her first start, making the score 1-0 just two minutes into the game.

Forward Kim Schneider and midfielder Nikole Solis each sent attempts at goal after Viamille’s goal, but both attempts were too high and missed the net.

The game continued with less action from both teams, but the ball was being dominated by the Panthers. Approaching the half time mark, defenders Reagan Bridges, and Kennedy Floyd each took a shot at goal, but both attempts were too wide.

As the second half kicked off, it was much of the same for the Panthers. Midfielder Dominique Marcelli made her mark on the game with good defensive play and creative passing.

Solis showed off her skills, slicing through the MTSU defense, sending a “don’t worry” message to her team as she rolled the ball into the net for her seventh goal of the season, making the game 2-0. .

Defender Idelys Vazquez and forward Izelle Barriere joined the “shot at goal” club after each made an attempt at goal, but neither were successful.

Forward Noemi Paquin gave FIU another goal in the 86th minute, as she scored the third and final goal of the game, linking up with forward Sydney Amparo, who got the assist.

This win positioned the Panthers in ninth place in the C-USA Championship with a 3-8-4 record.

Amparo also shared her opinion on the 2022 season.

“I think especially at the start of this season, I saw it coming, I’ve never seen this team develop so fast in the time that I’ve been here for four years.”

Both Vazquez and Amparo reflected on their season with the FIU Women’s Soccer team, and they shared the improvements they noticed.

“I’ve never seen a team as committed as this team is now, and for them to be so young, and to already have that will to improve, wanting to be the best on the field, that’s amazing,” said Vazquez. “I know these upcoming seasons, they’re gonna be even better than they were this year.”

The Panthers recorded 16 goals this season, the most goals for the team since 2015. Coach Jonathan Garbar handled this year with discipline and showed flashes of the potential this team has.