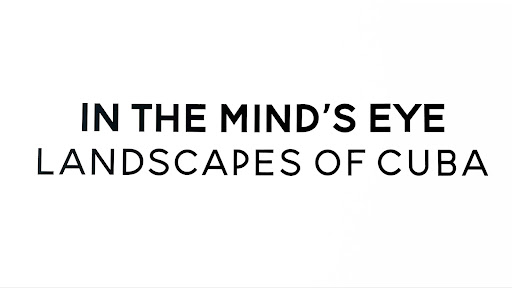 When Elenys Iglesia migrated to the United States at 4 years old, she kept memories of her homeland fresh in her mind. After visiting an exhibit at Patricia & Phillip Frost Art Museum, she made connections between those memories and the work on display.

“The houses and streets in some places are very similar to the mountainside of the country,” said Iglesia,  a freshman majoring in elementary education. “I thought of my mom’s uncle because she lives in the countryside. It gave me the nostalgia of what going to his house was like,” said Iglesia.

The museum at the Modesto Maidique Campus will host “In the Mind’s Eye: Landscapes of Cuba” until Jan. 15.

Amy Galpin, chief director of the Frost, curated the exhibit to demonstrate how Cuba has been pictured and imagined through different time periods.

“I wanted to acknowledge ways in which landscapes by Cuban and U.S. artists of the 19th and early 20th centuries inform the present,” said Galpin. “The exhibition is also inspired by Miami, a city deeply influenced by Cuban culture and people.”Many artists debut in the historical exhibit, which shows landscapes by U.S. and Cuban artists who reflect the ways it is viewed and imagined by pessimistic northern neighbors.

A painting by Diana Fonseca Quiñones, born in 1978 in Havana, from her “Degradaciónes” series integrates layers of paint fragments from local buildings.

“When I saw it, I immediately knew what it was because of the vibrant colors, which reminded me of my grandma’s house,” said Iglesia. “I see my family in Cuba and their houses, as well as my culture since others think Cuba is a poor economic country.”

A Cuban photojournalist and producer of experimental films, Juan Carlos Alom, born in 1964, has the 13-minute “Diario” at the exhibit, inspired by José Martí’s 1895“Diario de Campaña.” The film reveals factors of the Cuban landscape, and includes a sequence of the journey to Cuba from Haiti.

The exhibit also displayed U.S. painters like Winslow Homer, born in 1836, known for his landscape paintings, illustration and marine subjects.

His “Street Corner” watercolor painting illustrates the street scene of Santiago de Cuba, the first Spanish colonial city built on the island that focuses on architecture instead of people. During Homer’s visit, he noted Spanish soldiers aiming to suppress the nation’s support for the Cuban independence movement.

The museum also showcased historical landscape painting from American artists like Frederic Remington. He was born in 1861 and was later known for his sculptures, paintings, and illustrations portraying cowboys, soldiers, and Native Americans.

The Spanish-Cuban-American war was felt on U.S. soil as young soldiers traveled to Tampa to train for war.  His ink wash painting “Ninth Cavalry Colored Troops on Washing Duty in the Gulf” captured the scene in Florida, reinforcing that intertwined history between these countries.

Alessandra Henriquez, a junior majoring in digital multimedia production at FIU, reflected on her family’s hardship of migration due to American imperialism.

“It feels weird looking at this painting, knowing they went to prepare for war against my country of heritage for the benefit of American imperialism,” Henriquez said. “They were resting in Tampa, the city that my dad would first arrive at when he immigrated with my grandparents as a kid, getting ready to wage a war that would lead to the reason my family had to leave Cuba in the first place.”

The museum exhibition will continue to run through Jan. 15, 2023, featuring many more U.S. and Cuban painters and magazine and newspaper clippings of historical wars.

“I would like students to visit and experience rarely seen works by 19th-century artists as well as the contemporary works which might reflect some of their own experiences,” says Galpin.

“In the Mind’s Eye: Landscapes of Cuba” is at the Patricia & Phillip Frost Museum until Jan. 15.

Long-distance relationships aren’t for the faint of heart