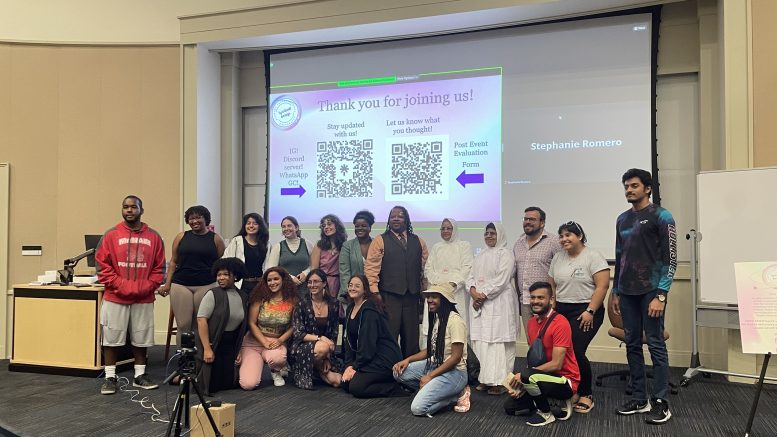 Joined by FIU’s Global Indigenous Forum, FIU’s Spiritual Beings student group led a conversation on the nuanced practice of spirituality and how it varies across cultures and religions.

The event took place in the Rafael Diaz Balart law building on Nov. 1, with virtual attendance also available. After signing in and grabbing a Spiritual Beings sticker, students could enjoy catering provided by Vicky Cafe.

Senior psychology major Stephanie Romero, president and founder of Spiritual Beings, laid the groundwork for the conversation by asking each panelist for their definition of spirituality.

Juan del Hierro, senior minister at the Christian-based organization Unity on the Bay, spoke of his spiritual journey, recognizing spirituality as an action to be taken and a path to the truth.

“Spirituality is how we practice our connection and understanding of a higher power,” said del Hierro.

“It’s more than a book, it’s more than sitting in meditation, it’s moving into those practices and getting those out into the real world.”

FIU Visiting Instructor and Jain nun  Chaitanya Pragya agreed, adding that spirituality is not only a connection to a higher power, but also a connection to one’s soul, or higher self.

“We are physical as well as spiritual entities,” said Pragya. “According to Jainism, there is an infinite number of souls in the universe, and to connect to them, you must connect to your divine self.”

David Bynes, pastor and director of FIU’s Office of Social Justice and Inclusion, shared moments of his life before and after his spiritual awakening, as well as glimpses into his studies of various religions.

“We are God, as we are connected,” said Bynes, expressing that all human beings are connected under one higher consciousness, and because of this, the higher power can be found in everyone.

Spirituality, according to the speakers, is present in every interpersonal relationship one has, even with strangers on the street.

Activist Jasmen Rogers, founder, and principal visionary at Folding Chair Consulting shared her experience of being guided by her late grandmother’s presence, whom she connected with after learning about Santeria, an Afro-Caribbean religion.

Beyond a connection with ancestors, Rogers also adds the importance of spirituality in taking action when any type of relationship turns toxic.

“Spirituality is conviction,” said Rogers. “What are the things that move you to act?”

Reverend Houston Cypress, artist and environmentalist of the Otter clan from the indigenous Miccosukee tribe, emphasized that fostering a healthy, communicative environment with all living beings is the best way to honor the higher power.

“Some of my spiritual practices involve connecting with nature, like going on a hike, and listening to the animals and the elements,” said Cypress, creator of Love the Everglades Movement.

“Are we embracing this forest as our family, and are we honoring it by protecting it?”

A spiritual connection with one’s surroundings and sensations allows for a sense of unity with a higher power–speakers gave examples such as music in the streets, and waves crashing on a bay.

“Know that part of you so well that you begin to see, hear, and feel where you’re supposed to go,” said Bynes on what spirituality reveals about one’s journey in life.

Romero asked the panelists for ways to frequently practice spirituality, who gave many recommendations ranging from eating healthier to sitting in isolation every day for 10 minutes, as well as reading books like Michael Singer’s The Untethered Soul.

The spiritual leaders also discussed organized religions and their scriptures overlapping in many beliefs. Despite this, they agreed that treating others well is essential in connecting with and honoring a higher power.

“We’re always connected, and it just takes a breath to remember that.”