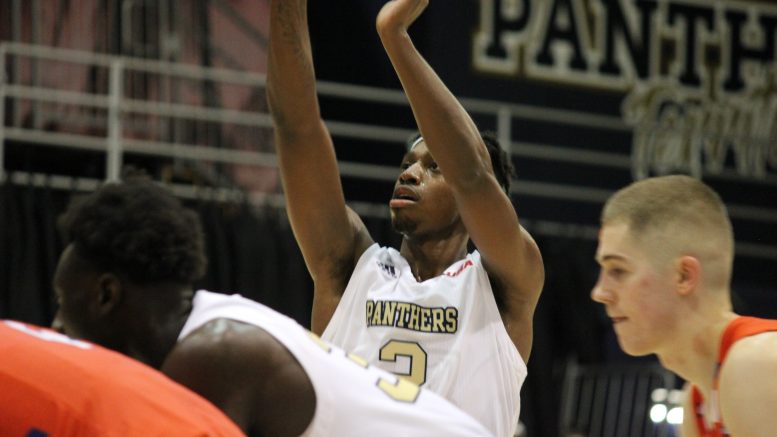 In front of an ecstatic home crowd, FIU won its opening game of the season, but it didn’t seem like that would be the case at first. Houston Baptist got everything it could ever want in the first half, their game plan couldn’t have worked better.

FIU’s defense was stretched paper thin. While the full-court press was effective in forcing turnovers, it also resulted in the Panthers overcommitting. Double teams were employed early on and normally that pressure is enough to force an errant pass or two, but the Huskies kept finding the open man with pinpoint passes.

Long looked like Steph Curry incarnate on the floor, shooting 9-12 from deep. Shot after shot, Long rained fire and fury from the left corner and the top of the key, finishing the night with an electric 31 points

Defensive rebounding was a massive issue for the Panthers. The Huskies were grabbing offensive boards left and right, buying them more chances to score.

Entering the second half, the Panthers trailed 41-32. The momentum was in the Huskies’ favor and it seemed like FIU was about to hand Houston its first opening-night win in a decade.

Everything changed in the second half.

Long rattled off three 3-pointers, but the Huskies experienced a drought that puts the Dust Bowl to shame.

They didn’t score for five minutes straight, allowing the Panthers to claw back into the game.

FIU took the lead for the first time in the game with 10:45 left off a Dean steal and layup. The crowd roared in excitement in what was one of the highlights of the night.

Coach Jeremy Ballard had confidence in his team to come back and win in front of a large crowd.

“I think you saw a little bit of first-game jitters. There are some unintended consequences when you have a great turnout like we did,” said Ballard. “We were just a half-step slow, and in Division I when you’re a half-step slow, you’re going to be a whole step behind.”

The stars of the show for FIU were undoubtedly Dean and Jones.

Dean was the spark that kept the Panthers in the game even after going down 13 points. His efforts on both offense and defense were simply phenomenal. Dean frequently absorbed contact and converted tough layups. He also showed off his quick hands, ending the night with five steals.

Jones actually started the game off pretty slow, shooting 3-4 for eight points. But he came alive and matched his career-high of 23 points, shooting 7-8 from the field and 8-8 from the charity stripe. Jones played with the tenacity and physicality expected of a team leader and helped orchestrate the Panthers’ comeback.

FIU now heads into another favorable matchup against FNU on Thursday, Nov. 9 at home.

Be the first to comment on "Jones, Dean shine in monumental win over Huskies"