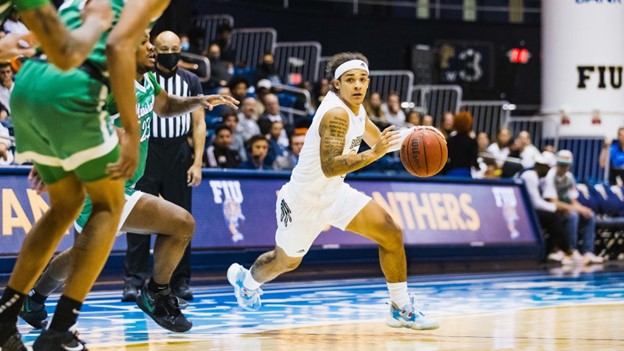 The Panthers suit up to take on the FNU Conquistadors on Thursday, Nov. 10 at Ocean Bank Convocation Center.

After earning a hard-fought win on Monday, FIU looks to keep things going against an opponent that has struggled to find its footing early this season. FNU enters the matchup 1-4, after narrowly pulling away with a win on Tuesday against Florida Memorial.

Everything in the cosmos points to a tremendous win for FIU.

The Conquistadors’ most consistent player is sophomore guard Ryan Sanchez, who’s averaging 15 PPG. From watching the tape, it’s clear that Sanchez isn’t much of a shooter, he uses his quick burst and creative finishing to get things done. He’s aggressive and gets himself to the charity stripe often, averaging 8.5 FTAs.

Sanchez does have a noticeable flaw to his game: turnovers. Averaging 3.25 turnovers a game, an aggressive Panthers’ defense could have a field day with Sanchez and the team, racking up steals.

Rebounding should also be a distinct advantage for FIU. In every game so far, FNU has been outrebounded by an average of 11.5 RPG. Two teams recorded 40+ boards against the Conquistadors this season (Florida College and Southeastern).

With the average height of FNU’s roster being 6’2 and no player exceeding 6’9, the Panthers have superior size and should lean into that fully.

FNU’s best asset as a team is their 3-point shooting. Across four games, the team has averaged a solid 35.1 3P%. Against Florida Memorial, they shot 9-18 from three.

Freshman and sophomore guards Matthew Robinson and Jovan Brito deserve extra defensive attention. They are the team’s unquestioned sharpshooters and can take turns leading the team in scoring.

When left open, count on FNU converting. This isn’t the type of team you want to leave open beyond the arc. The defense will need to be on point from the perimeter.

That being said, the Conquistadors’ worst asset is 100% their defense. Porous doesn’t even begin to describe it.

In four games, opposition have averaged 88.3 PPG on the Conquistadors. The team gets lit up from three often and don’t fare better on the interior either.

The Panthers should attack the paint at every opportunity. FNU lacks a significant defensive presence down low and it has to be exploited.

If there was ever a game for freshman and junior guards Arturo Dean and Javaunte Hawkins to record career-high assist numbers, it’s this one. Both are capable of collapsing the defense and kicking out to open shooters.

Look for another big night from Denver Jones. Jones matched his career-high on Monday with 23 points.The question now is can he surpass that? Against this team, absolutely. Expect Jones to end the night with at the very least 15+ points.

Don’t go into this game looking for an evenly fought contest. FNU is 1-4 and lack consistent offensive weapons. All the ingredients for a blowout win are there for FIU; whether they choose to cook a Michelin star meal or not is up to them.

Tip-off is at 7 PM and the game will be streamed on CUSA.tv.

Be the first to comment on "Panther Preview: FIU Basketball vs. FNU"