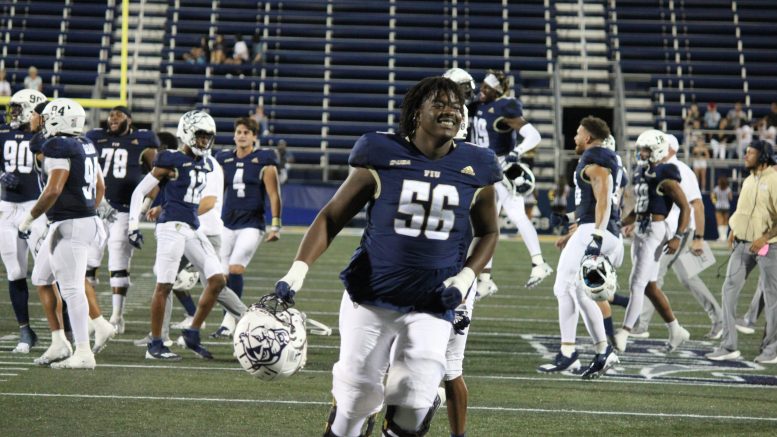 Winners of the Shula Bowl get a 70-inch trophy that has a helmet cutout of both teams on each side, and a plate marking the victor of that year along with the score. The winning team displays it at their campus until the following year.

This years Shula Bowl is far more important than years past, as the Panthers are two wins away from a long awaited bowl game, and with three games left on their schedule, a loss this weekend will be a punch in the gut to the teams momentum.

FAU comes fresh off a bye week, having all their starters rested, healthy, and ready to go get their 16th Shula Bowl Trophy with third year Head Coach Willie Taggart.

For Panthers Coach Mike MacIntyre, his young team comes into this game with a purpose. They know how big this rivalry is, and how one-sided it’s been for the past decade, along with knowing they need a win to keep their bowl hopes alive.

In their last outing against North Texas, the Panthers lost in a humiliating fashion, and it seemed as if all the teams hard work fell flat. The Panthers scored 14 first half points to North Texas’ 45.

When you look at the teams both programs have beat, it’s not that impressive. Both schools have beat the teams in the bottom half of Conference USA, with the likes of LA Tech, Charlotte, and Rice, and have both lost to North Texas. Because of this, it’s hard to make a case based on recent games, you have to look closely at player progression and skill positions.

For the Owls, Sophomore Wide Receiver LaJohntay Wester is averaging 12.5 yards per catch, same as FIU’s Tyrese Chambers, but Wester has double the touchdowns with a total of 8. Although both receivers are talented, both struggled to get things going in their last game and look to bounce back tonight.

In the backfield, Junior Running Back Lexington Joseph has proven to be a problem for defenses, averaging 5.1 yards per carry and 420 yards in 83 attempts.

On the Owl side of the ball, Larry McCammon is getting way more play time than Joseph, as he’s ran the ball 138 times, gaining 740 yards with an average of 5.3.

Both defenses have struggled throughout the year, and every time they’ve had a good game, all the progress would go away the week after.

For FIU, it happened this past week in a 38 point loss to North Texas. For FAU, they’ve never had a steady pace for their defense, holding one team to less than 15 points one week, but giving up 30+ in the next.

For the first time in six years, FIU has a chance to bring home the coveted mahogany Shula Bowl trophy, a piece of priceless hardware that they’ve been able to hold only three times in the past decade. Coach MacIntyre talked about how monumental the rilvary is in a pregame press conference, and how it hasn’t been going the Panthers way for a while.

It will take a lot to beat this FAU program, a program that has had FIU’s number for nearly 20 years, but Coach MacIntyre believes in his young and talented squad.

The game can be streamed on Stadium and will be held at the FIU Stadium on Saturday at 7pm.

Be the first to comment on "Panther Preview: Shula Bowl XXI FIU vs FAU"