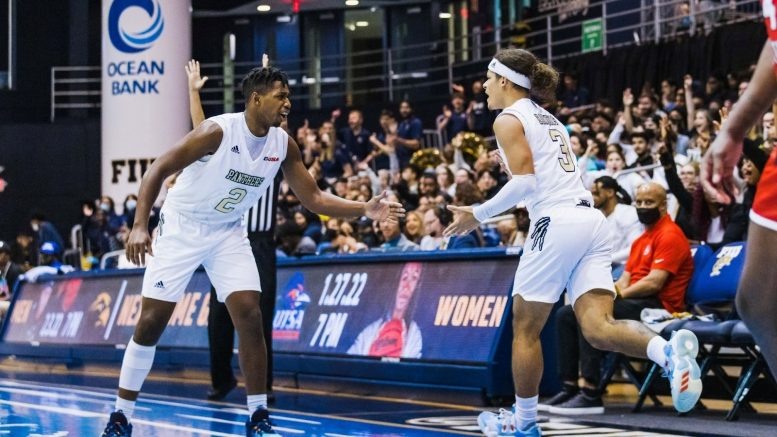 The FIU Panthers channeled their inner Disney channel movie bully and stuffed the Florida National University Conquistadors in a locker at home 95-74.

Right from the tip, it was obvious this was going to be a lop-sided matchup. The Panthers couldn’t have asked for a better first half.

FIU dominated in terms of physicality. They were the stronger, bigger team and converted some tough baskets. The team knew that one of FNU’s deficiencies lay in their interior defense, and they took full advantage of that.

The pick-and-roll game worked wonders as Conquistador defenders would often get caught on screens, allowing FIU to cut to the basket for the easy layup.

Meanwhile, FNU couldn’t guard a middle school basketball team. It was apparent from tip-off that this team was just too many steps slow to contain the Panthers. They gave up 48 points in the paint in the first half alone.

It wasn’t all just interior play though. In fact, a lot of the damage FIU did came from behind the line. FIU’s ball movement was superb, and it led to open threes galore. In the first half, the Panthers shot 6-14 (42.9 3P%).

But the offense was not the star of the show for FIU. It was their lockdown interior and perimeter defense that really dazzled everyone. Defense wins championships and this game was a testament to that. The box score doesn’t do it justice.

The Conquistadors could barely get the ball up the court in the first half. They had to use up two of their timeouts in order to avoid a penalty. FIU’s smothering made inbounding the ball an absolute nightmare, and that’s reflected in the turnover differential between the teams (11 for FNU, four for FIU).

The Panthers also wracked up steals and blocks. The Conquistadors couldn’t find any open threes at all. FIU defenders were ruthless, fighting through screens and throwing frequent double teams at FNU’s star sophomore guard Ryan Sanchez.

After exploding to an early 31-12 lead, FIU just kept throwing punches, looking for a knockout. They headed into the half-up 49-25.

The second half saw the Conquistadors put up more of a fight.

Sanchez was remarkably good from the 3-point range, which is strange considering prior to this game, he had only made two threes in four games played. He shot 4-6 from deep and finished the game with 19 points.

Sophomore Forward Gabriel Castillas was the only real bright spot in an impoverished FNU offense. He looked awesome, scoring 34 points on a blistering hot 47.8 FG%. He was the only member of FNU’s squad who could get routinely open to cash in from three.

This game would’ve made Dominque Wilkins proud because it was an absolute highlight reel from start to finish. Sophomore forward Mohamed Sanogo pinned Sanchez’s shot to the glass and almost gave sophomore forward Girardi Cubillan his very own Kodak moment, nearly posterizing him. Later, fans got to see a Dashon Gittens lob to Jayden Brewer for the slam.

It’s hard to claim any one player from FIU was the MVP. It was a well-rounded team effort that sent FNU packing. But, if someone deserved the distinction, it would probably be junior guard Javaunte Hawkins, who shot 5-10 from downtown for 15 points and had three assists.

Graduate forward Nick Guadarrama also deserves some praise for this game. He led the team in assists (4) and rebounds (7). Guadarrama has yet to make a three, but once he finds his rhythm he will be a force to be reckoned with.

FIU goes on the road to run into their first true challenge this season: the NC State Wolfpack.