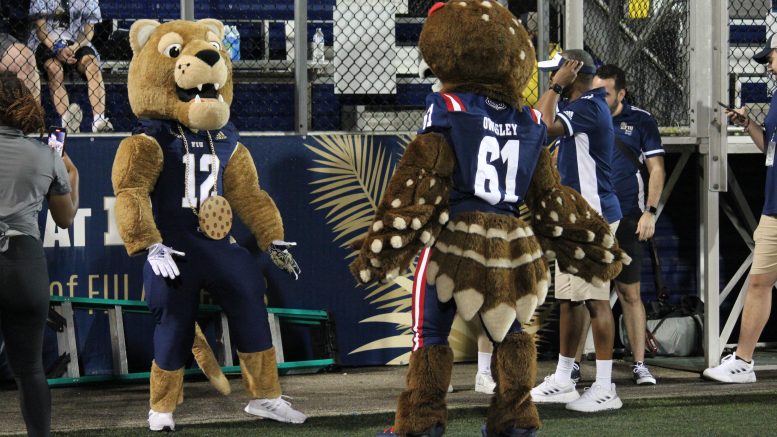 The FAU and FIU mascots pregame. (Photo by Adrian Valdivia)

On a night that began with heavy rain, FIU were not only washed away by the harsh conditions, but by a physical FAU run game that propelled the visiting Owls to a 52-7 victory, the largest margin of victory in Shula Bowl history.

The defeat marks the sixth straight loss against the Owls in the Shula Bowl and showed that there is still work to do for this Panthers squad to compete with the top end teams of Conference USA.

The first play from scrimmage set the tone for the Panthers, as quarterback Grayson James threw an interception that gave Owls field position within their own 10-yard line. James’s counterpart N’Kosi Perry rushed in for FAU’s first touchdown two plays later.

Things didn’t get any better for the Panthers as the quarter progressed, giving up two more touchdowns as the Owls entered the second quarter with a 21-0 advantage. FAU ran all over a shell-shocked Panther defense in the opening quarter, and the damage they did was critical.

FIU put together an improved second quarter, getting their only touchdown of the game on a 28-yard scamper from James, but from that moment forward it was all Owls.

FAU running back Larry McCammon and wide receiver Lajohntay Wester led the way for an explosive Owls offense that put up 211 total yards of offense in the first half compared to FIU’s 140. As the teams went into halftime, the Owls led 31-7.

It wouldn’t take long for FAU to add another score, as Wester ran in for the touchdown to extend the lead to 38-7, the Owls sideline began to sense their impending victory as their eyes locked on the Shula Bowl trophy.

The Panthers wouldn’t threaten FAU for the remainder of the game, as the visitors dominated play.

“We’re just not hitting on any cylinders on offense or defense right now, the last two weeks have been deplorable,” MacIntyre said. “So we got to keep working.”

For the Panthers this defeat highlights how far the program still has to go before they can compete. There have been some positives this season, but blowout losses against Western Kentucky, North Texas and now FAU have shown the areas that need improvement.

A young team full of players that still have a lot of football left in front of them, the Panthers still have two games to play and become bowl eligible. But with a team-high in penalties at the Shula, and a blowout loss in two straight weeks, there is need for rapid improvement if FIU wants to play in the postseason.

“They’ve got to take a look introspectively like a coach doe:, how can we fix things, how can we move, what can we do better?” MacIntyre said. “That should definitely add fuel to the fire.”

Heading to El Paso, Texas, next Saturday for a showdown with the UTEP Miners, the Panthers have a week to prep for their final road game of the season and keep their bowl hopes alive.

Be the first to comment on "Panthers lose their sixth straight Shula Bowl, get blown out by the Owls"