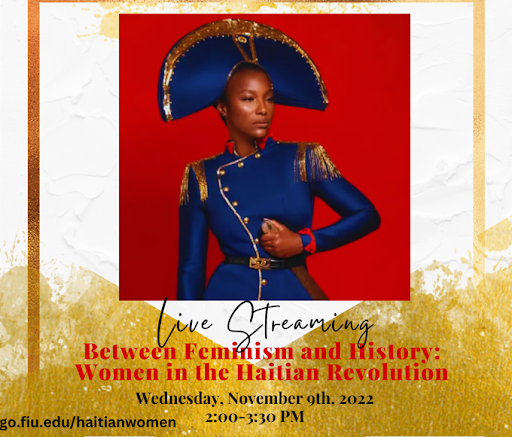 The Kimberly Green Latin American and Caribbean Center, in part with the Millenium Fellowship, hosted a seminar titled “Between Feminism and History: Women in the Hiatian Revolution” on Wednesday, November 9th.

Led by FIU student Anastasia Legoute, the lecture shined a light on the women who participated in the Haitian Revolution, in which slaves liberated themselves from French colonial rule in 1804 after fighting for 13 years. Guest speakers Dr. Crystal Eddins of the University of North Carolina, Charlotte and Professor Sabine Lamour of the State University of Haiti spoke about the women of the revolution, many of whom are overlooked in history books and classes.

Legoute, a senior at FIU, organized this lecture event as part of her senior project.

“My project tackles an important subject, which is the representation of Haitian female heroes in historic textbooks,” said Legoute. “After 14 years studying in the Haitian school system, I never had this image of brave strong female heroes fighting body and soul for our independence.”

Eddins’s lecture acknowledged the loss of historical records and representations of enslaved black women in particular, highlighting the roles they played in traditional African society which they were ultimately robbed of through the trans-Atlantic slave trade, comprising half of the enslaved population of Haiti at the time of the revolution.

“I’d argue that if we want to understand enslaved women’s lifeways prior to, during and after the Haitian Revolution, we have to begin by interrogating the norms, values, behaviors and roles that African women embodied in their homelands prior to capture,” she said.

“By recovering African women’s history, we can piece together their economic, militaristic, political and religious activities that predated and contributed to the revolutionary events in Haiti,” said Eddins.

She also highlighted the cultural and religious role of women in supporting the revolution, maintaining Haitian Vodou as a cultural tradition brought from Africa, as well as participating in the revolution as spies, medics smugglers and other support roles.

“In politics, a gesture carries values. It carries a world to be created,” said Lamour. “Defilee’s gesture was a statement, a call for creating a political family, a political entity that was in the opposite of colonial slavery.”

The presentations were followed by a question and answer period addressing several aspects of this history, as well as the presenters’ own personal involvement in Haitian history and why it’s important to understand.