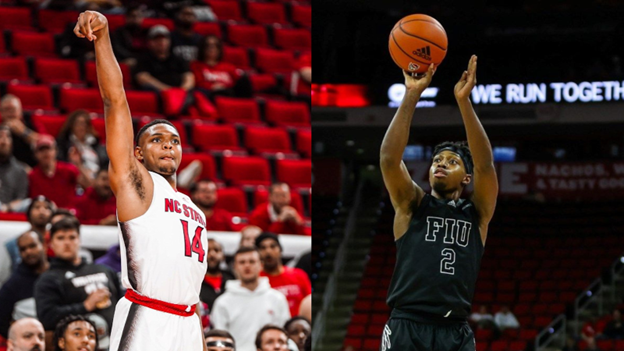 The FIU Panthers were out-gunned Tuesday night 107-74 by an NC State team that just couldn’t miss.

In enemy territory, the Panthers, under the shining lights, looked more like deers in the headlights than anything else.

It became quickly apparent that this game wasn’t going to go in the Panthers’ favor. NC State rattles off a 19-2 run to take a 28-7 lead, this can be attributed to multiple FIU turnovers.

The Panthers’ offense didn’t do a great job of taking care of the ball, and the Wolfpack had 9 steals to end the half.

Heading into halftime, the Wolfpack was sitting on a comfortable 25-point cushion, up 57-32. The Panthers have been unable to generate much offense outside of sophomore guard Denver Jones, who had 16 points to close out the half.

The second half saw the Panthers take a more aggressive approach. They fought over screens more, did their best to give up fewer open threes and started to attack the paint more.

But it just wasn’t enough as the Wolfpack retained the hot hand for the entire night, not slowing down heading out of the break. The Wolfpack hit a few more threes and the game ended 107-74, a 33-point blowout.

Did the Panthers play poorly? Not really. Normally, a field goal percentage of above 50% is a recipe for success. But there were still some mistakes made on both ends of the floor.

Turnovers were the biggest thorn in FIU’s side. In the first half alone, the Panthers turned the ball over a whopping 13 times, resulting in 18 points for the Wolfpack. They were only slightly better coming out of the break, turning the ball over nine times for a total of 22 turnovers. Any chance of a comeback was routinely cut short by a careless FIU turnover.

FIU’s perimeter defense was egregiously bad at times. The first half of the game looked like a 3-point shooting exhibition for NC State. Some possessions had the Wolfpack wide open. Even when the Panthers did a better job of closing out on shooters, it didn’t matter much because the shots were still going in. Better offense always beats better defense.

Graduate guard Jarkel Joiner and senior guard Casey Morsell pommelled the Panthers with a barrage of 3-pointers, combing for 12 of the team’s 15 baskets from distance.

The team was also outrebounded 40-28, with graduate and sophomore forwards Dusan Mahorcic and Ernest Ross dominating the glass for NC State with eight and five rebounds respectively.

Jones and graduate guard John Williams Jr. were the only true bright spots in a Panthers offense that was locked in a cell and had the key thrown away. Jones kept FIU somewhat in it in the first half, scoring 16, but then had a much quieter second half, finishing with 19 points total.

It was Williams Jr. that took control of the second half for the Panthers, making tough basket after tough basket. He ended the night with 14 points and was FIU’s second-leading scorer.

One of the few good things that FIU did was feed the 5,034 fans in attendance free Chick Fil A by missing two consecutive free throws. In fact, the Panthers missed a staggering amount of free throws. They took 15 trips to the line and only converted seven of them (7-15), whereas NC State only missed three of their 17 free throws (14-17).

Despite all this, this loss shouldn’t be a discouraging one for the FIU Panthers. For them to still be able to put up 74 against a squad this talented should inspire confidence for the rest of their season and bodes well for their record.

The game, while uneven, wasn’t devoid of fun highlights. Freshman guard Arturo Dean threw junior center Seth Pinkey a perfect alley-op pass for the two-hand slam. Then a few possessions later, sophomore guard Petar Krivokapic banked in a 3-point shot from the corner and was fouled in the process, resulting in a rare 4-point play.

FIU now falls to 2-1 and looks forward to a bounce-back game against Bryant on Saturday, Nov. 19 at home.