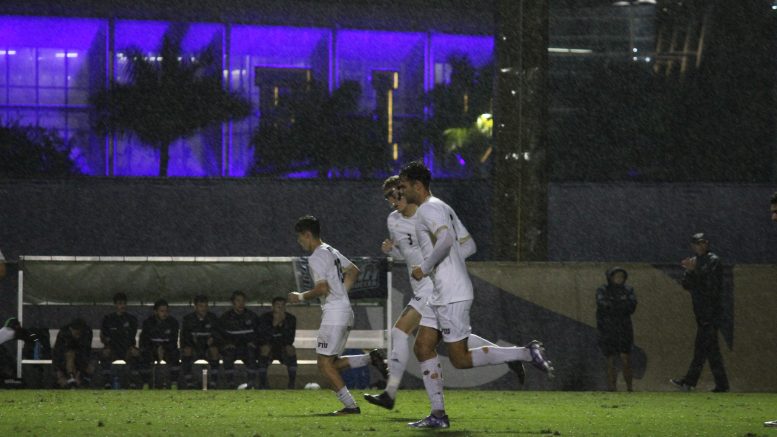 FIU players run through the rain during their game with UNH. (Photo by Adrian Valdivia | PantherNOW)

With the world’s gaze fixated on the World Cup over 7,000 miles away in the desert sands of Qatar, FIU had their own cup to play in, competing in the wet and muddy grass of Miami the Panthers outlasted the University of New Hampshire in a thrilling NCAA tournament contest.

The Panthers fought the ghosts of last season’s heartbreaking 3-2 round of 32 exit to Wake Forest and the treacherous conditions to book themselves a date with Duke in the Sweet Sixteen of the NCAA tournament, their first appearance in this round of the tournament since 2003.

The Blue Devils were ranked as high as second in the nation this season and come into the game with FIU off a 3-1 victory over Denver.

“We had to do a lot to win this game,” Russell said post game. “We had to change systems and formations and personnel.”

FIU got on the board 13 minutes into the match with a goal from forward Rasmus Tobinski. Stepehen Afrifa sent in a cross looking for the German, but it went past him and found Philip Hildebrandt who fired it back in and Tobinski stabbed it home to get the game’s opening goal.

“First off, I don’t think it was a cross,” Tobinski joked about Hildebrandt’s ball into him for the goal. “I actually scored with my shin, so just get anything on the ball and get it over the line.”

The remainder of the first half was a tense but controlled affair for FIU, keeping UNH from getting any real chances in the final moments of the half.

As the rain continued to fall, the second half kicked off and the Wildcats came out searching for an equalizer. They pressured the Panther backline consistently for the opening 20 minutes, and in the 64th minute they leveled the score.

UNH had been threatening on set pieces all night, and the goal came directly from a corner kick. Marked as an FIU own goal, the corner taken by the Wildcats slipped through the entire defense and past Kevin Harr in net. Regulation time ended knotted up at one, forcing the game into extra time.

FIU got on the board early from an own goal by a UNH defender, but with two minutes remaining the Wildcats drilled a freekick. New Hampshire midfielder Rory O’Driscoll buried his chance with a perfectly placed strike, sending the game into a penalty shootout. Before penalties, FIU changed their keepers as Harr was replaced by Matt Levy.

“In training, we train PK’s a lot, especially later on in the season,” Russell said on the decision to change keepers. “We’ve looked at all of our goalkeepers and how they move, and Matt has been the best and Matt has been excellent, and Matt’s not rattled by these big moments.”

Levy saved the first penalty kick he faced before enduring a marathon shootout, as the Panthers and Wildcats exchanged makes and misses for 12 rounds. Following a miss from a UNH player in the 12th round of penalties, Carlos Scheckermann stepped up to score the winning penalty to send FIU into the Sweet Sixteen.

“When I saw the ball hit the back of the net, amazing feeling,” Scheckermann said about his decisive penalty. “Sometimes you have to be brave in those moments.”

For most of the players on this Panthers squad, this win against New Hampshire was not only payback for their regular season loss to the Wildcats, but retribution for their second-round exit to Wake Forest last year.

“I feel like its revenge for last year because we didn’t make it to the Sweet Sixteen, it shows how we’ve improved,” said midfielder Matthias Lavenant.

The match with Duke is at 1 p.m. on Sunday Nov. 27. The game with the Blue Devils will prove to be FIU’s toughest test of the season, and these are the teams they need to beat if they want to win a national title.

“We’re excited for the opportunity, we’re excited to go, and we have a whole week to prepare,” Russell said. “It just makes Thanksgiving that much sweeter.”

Be the first to comment on "Panthers top Wildcats in a thriller, move onto Sweet Sixteen for first time since 2003"