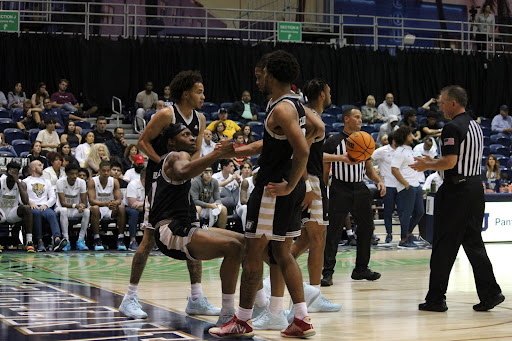 The Panthers during their loss to the Bryant Bulldogs. | Adrian Valdivia, PantherNOW

There’s a well-known Greek myth that tells the story of Icarus, a young boy who used artificial wings to fly into the sky. The tale ends in tragedy, as Icarus excitedly got close to the sun, had his wings melt and he plunged into the ocean and drowned.

FIU was soaring through the heavens, up a healthy amount against Bryant. Victory was a half away. But as is foretold by the story of Icarus, the Panthers flew too close to the sun and came crashing down in a ball of flames.

The FIU Panthers let the game slip away to the Bryant Bulldogs 85-91 on Saturday, Nov. 19 at Ocean Bank Convocation Center.

From the tip-off, anyone could tell that this was going to be a good game. The Panthers and Bulldogs took turns exchanging 3-pointers and tough buckets. Sophomore guard Denver Jones was electric, making jumpers from all over the court.

Heading into halftime, the Panthers led by as many as eight. Both teams were playing remarkably well, but FIU was in control of the pace.

But then, the Bulldogs broke off from their leash, with their long-range snipers coming alive in the second half.

Senior guard Charles Pride and graduate forward Antwan Walker led the charge for Bryant, dropping triple after triple to cut into the deficit. Fastbreak buckets were also in favor of Bryant, as they were outscoring FIU 27-10 in that department.

FIU, who held the lead for the entire game, now found themselves down five with under five minutes to play. The Bulldogs kept cashing in from long range, while the Panthers faltered and couldn’t get up a quality shot. Bryant iced the game with some clutch free throws, winning 91-85.

Deflating is the only word that can accurately sum up this loss. It now puts FIU at a 2-2 record and marks their second consecutive loss since losing to NC State.

Certain problems plagued the Panthers in both halves of the game.

FIU shot a paltry 37.5% from the charity stripe, which is simply unacceptable. It’s been a problem for them all season long and is one they need to fix. If the Panthers made their free throws in the first half, they would’ve been up double digits at the end of the half, which is a huge difference-maker.

Graduate guard John Williams Jr. had an uncharacteristically off night. Williams Jr. is at his best when he’s attacking the basket with his crafty finishes around the rim. But this game, he got into a dreaded shooting slump, going 1-7 from the field and 1-4 from three. He also received a technical foul, which isn’t exactly the best of motivators.

Williams Jr. is one of FIU’s most talented players, so there should be no doubt in his ability to come back stronger than ever.

Freshman guard Dashon Gittens had his best game of the season, putting up 16 points on an efficient 5/10 shooting. His performance helped him receive the Conference USA Freshman of the Week recognition.

While the game didn’t go the Panthers’ way, it was still a night of basketball jam-packed with highlights. The Putnam Academy connection was on full display between Gittens and fellow freshman guard Arturo Dean, with Dean serving up a perfect lob to Gittens for the slam. In the second half, Jones got his own stunning alley-oop slam from graduate forward Nick Guadarrama.

Aside from lobs, there was also a fair share of nasty ankle breakers, but none of them ended with a score which was somewhat disappointing.

FIU heads into a matchup against a Stony Brook team that has been blown out by double digits in all three of their losses this season. If the Panthers ever needed a bounce-back win, it should be this one.

Be the first to comment on "Panthers let it slip to Bryant Bulldogs, 85-91"