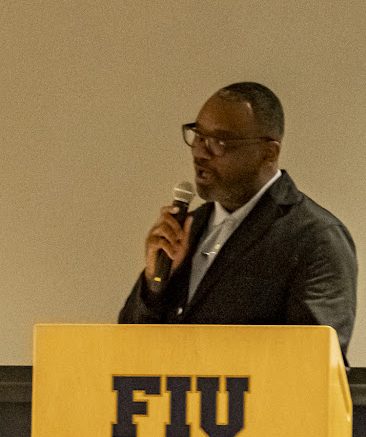 Thunderous applause, cameras flashing, and a holler from the crowd set the scene for Dr. Shawn Christian’s dive into the Exile Studies through literature panel, in which he delves into experiences of “ideological divergences, and cultural disparities.”

Christian expanded on the topic of what it means to be an exile and the artistic study of it within literature by relating to the lessons taught by African-American writer, James Baldwin on Nov. 14.

“We are at a point where the human condition is in exile,” said Christian, as opening to his lecture in which explores the feeling of distinctness in society– and how “histories of war, natural disasters, and economic collapse” have added to this feeling of the individual.

Christian elaborated on Exile Studies, with the key takeaway being that Baldwin, like others in the U.S., felt this “otherness” which made him feel isolated from his fellow countrymen.

On the road to exploring such an emotion, Baldwin “self-exiled himself” from America, traveling to France, Turkey and other countries in the pursuit studying his personal feelings of displacement.

Christian highlighted that no matter where Baldwin went, he carried that sense of isolation and exile that originated in his homeland. Christian emphasized that “if one does not feel as if they belong anywhere, they will feel alone everywhere.”

Christian was not the only speaker at the night’s event; many of his colleagues presented their own opinions regarding the Exiles Studies program.

“When engaging a public forum like Baldwin, it contains a certain complexity and intellectual depth without losing connection to the public irrespective of their degree,” said Russell as she discussed her opinion on whether or not events such as the Exile Studies lectures help curb academic elitism by connecting more with students.

It is of equal interest to understand that not only was the Exiles Studies a lecture event, it was also a free lecture, bridging the gap between academia and perspective to the students regardless of whether or not they were English majors or even connected to the Exiles Studies program.

“Exile literature at its core invites national and international students. Once we’ve found a curriculum, it is natural to establish its education,” said Milbauer, when asked if this program could lead to exploration of literature as a reflection of people’s struggles in the modern world.

This message resonated with the crowd which led to strong engagement during the Q&A portion, where many students raised hands to inquire.

Several students asked questions about the Exiles Studies program or to hear more about Baldwin’s views and how they might translate into modern society.

“Baldwin uses ‘exile’ to engage Americans in cognitive dissonances in order to make people question their stereotypical views of one another,” Christian answered, in relation that Baldwin would encourage a view that challenges our fundamental understanding of ‘other’ people.

“Do you know yourself?” asked Christian, adding that “The art has to be about a basis of deep self knowledge and reflection, almost an exorcism of your pains and your wants and your desires. It’s a life journey. This is the struggle of the artist.”

If interested in learning more about this program, contact Dr. Milbauer: milbauer@fiu.edu or Natasha Neckles: necklesn@fiu.edu to find out more.

EDITORIAL: MMC and BBC SGA’s should be one cohesive unit

Everyone should be a feminist

Students Fed Up With Lack Of Food Options At BBC

Be the first to comment on "The Department of English’s Exile Studies defines what it means to be an exile through African-American literature."