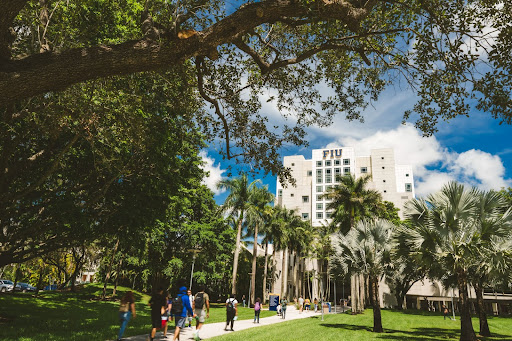 Like many freshmen, I came to college energized and excited for what was to come. Reflecting back on my first semester, the college experience was completely underwhelming.

After watching countless hours of college-life TV shows and movies, I wanted the typical experience: living in the dorms, going to football games, having that set group of friends, eating in the dining hall, participating during Homecoming and late nights at the library. Yet this semester was nothing like I expected it to be.

Committing to FIU earlier this year, I was more than aware this wouldn’t be the case. Unlike most college freshmen, I wasn’t housing on campus — I stayed in my hometown, Miami. I decided to attend one of the biggest commuter schools in the country, but I still planned on making the best of the experience.

Since I wasn’t living on campus, I put an effort to be there as much as possible to get more of that college experience. I got a job on campus and managed to get as many in-person classes as I could. I made other efforts as well, like getting a meal plan with meal swipes to eat at 8th Street, the dining hall at Modesto Maidique Campus.

I also tried my best to attend football games, like the first game of the season against Bryant University. And although we won, the experience was disappointing — the stadium was mostly empty and the panther spirit seemed to be lacking. I haven’t attended another one of their games since.

Since this experience was a waste of my time, I’ve chosen not to put effort into attending other events. I take public transportation to get home, which means my commute to and from MMC is nearly four hours.

I looked forward to Homecoming, especially Panthermonium, the annual homecoming concert. Although I was disappointed by the artists set to perform, I still bought a ticket to see the show and it ended up being canceled with no explanation. It was frustrating and disappointing — I expected there to be lots of energy, but the entire week felt spiritless.

Other than FIU’s institutional problems, college itself hasn’t been easy. I have six classes: two in-person classes, two hybrid classes and two fully online classes. Surprisingly, taking 16 credits this semester hasn’t been much of a hassle, but making friends has.

Since I am lucky to have brought in a lot of college credits from high school, many of my current classes are with mostly sophomores and juniors. It’s frustrating since I can’t relate to them. Even though I’ve made acquaintances, it’s hard to develop friendships when we all go our separate ways after class.

Seeing people I went to high school with flaunt their new friend groups in their colleges makes me feel as if I’m behind on the college experience.

Other than this I’ve also experienced symptoms of imposter syndrome, the feeling of not being worthy or deserving of what you’ve earned. Imposter syndrome is common, especially among first-generation college students like myself.

I’ve always taken pride in all the hard work I’ve put in to get here so I wasn’t expecting to experience this. But it has affected me, more socially than academically. I’ve recently questioned my every move and overthought my actions and interactions with others.

I’ve intended on joining clubs/organizations on campus but it hasn’t been easy. With my jobs and my class schedule, it’s been a bit of a hassle finding the clubs and organizations to join.

Although my first semester was a bit disappointing and underwhelming, I have hope for the future. As a firm believer in manifestation, I’m expecting a more exciting and less lackluster semester next spring.

A Necessity and not a commodity: Bridge over SW 8th st. desperately needed.