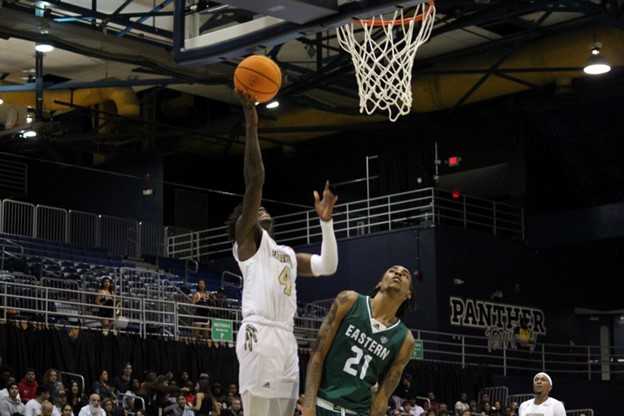 In the absence of their leading scorer, FIU did what it could to fill the void, but it wasn’t enough as they let it slip to the Eastern Michigan Eagles 80-68 on Wednesday, Nov. 30, at Ocean Bank Convocation Center.

It was a rematch with EMU, who took the Panthers into a quadruple-overtime thriller last season.

A game full of firsts for FIU this season, playing without their star sophomore guard Denver Jones for the first time.

But most importantly, it was a tale of two halves, with both being perfect examples of FIU basketball at its best and worst.

The first half was dominated by the Panthers as their individual and team defense was arguably the best it had been all season. FIU put the clamps on both sophomore forward Emoni Bates and the entire Eastern Michigan team.

Every shot was heavily contested and it shows on the box score. Bates struggled in the first half, finishing 1-7 from three and 1-9 from the field. FIU gave up only six points in the paint. The effort and energy on defense from the Panthers was incredible.

But in putting all their effort on the defensive end, FIU forgot about one small thing: they still need to put the ball through the basket. While they were able to exploit a vulnerable EMU interior defense, they were stone cold from deep, going 0-8 from long range in the first half.

FIU’s defense forced 11 EMU turnovers, which helped generate fastbreak opportunities, but the Panthers couldn’t hit a three to save their lives.

All of their scoring in the first half was done through a series of floaters and tough layups, courtesy of freshman guards Dashon Gittens and Arturo Dean.

Heading into the break, the Panthers were up 35-27. If Eastern Michigan were to have any chance of winning this game, they would need to overcome the staunch FIU defense.

And that’s exactly what they did.

Eastern Michigan came out aggressive. Instead of settling for contested long-range shots, Bates started passing out to the open man, spacing out the floor more. EMU were getting clean looks and making them. They were way better in the interior, relying less on their 3-point shot and instead deciding to challenge the Panthers inside.

Meanwhile, the FIU defense was showing signs of fatigue. They allowed more open shots, were outrebounded and gave up 20 points in the paint, which is a stark contrast to the mere six they allowed in the first half.

The game ended with the Eagles going on a 12-2 run to earn their largest lead of the night, 71-63. A few minutes later, a Bates 3-pointer and jump shot finally put the Panthers away 80-68.

FIU finished the game with their worst 3-point performance of the season, ending the night a pitiful 1-15 from three.

Bates and Farrakhan had seven and four points respectively in the first half, but in the second, both exploded for 26 and 25 points, combining for 51 of EMU’s 80 points.

Despite the loss, it wasn’t all bad for the Panthers.

FIU came into this game with a Jones-shaped hole in their offense, but graduate forwards Nick Guadarrama and John Williams Jr. did an excellent job filling the void.

Guadarrama was aggressive and assertive, attacking the basket and using his size to his advantage. Williams Jr. never ceases to impress with his finishing around the rim, as he ended with 13 points off a flurry of tough shots, including back-to-back reverse layups in the first.

The first half of this game was the prime example of what FIU basketball should look like: a tough, hard-nosed defense that forces turnovers and allows for easy buckets in transition. They dictate the pace and all you can do is sit back and watch.

The second half was Panthers’ ball at its absolute worst: committing turnovers galore and getting lost in an endless cold stretch with no end in sight.

FIU hits the road for the next three games, taking on FGCU on Sunday, Dec. 4 at 6 PM at Alico Arena.

Be the first to comment on "Panthers lose control against Eagles, fall 80-68"