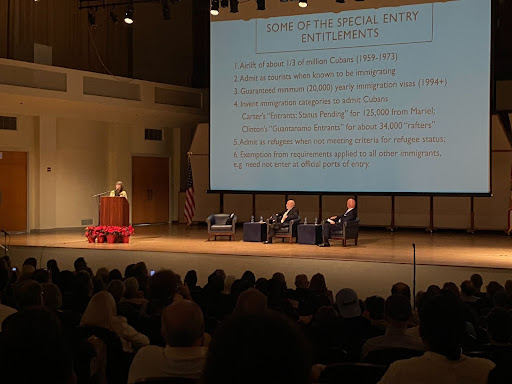 Chants, jeers, and comparisons to Communist Cuba engulfed FIU’s Wertheim Performing Art Center on Dec. 9 as the crowd made their opposition known to Susan Eckstein’s work “Cuban Privilege: The Making of Immigrant Inequality in America.”

The Boston University professor of sociology would subsequently publish a guest column in the Miami Herald that was critical of the event’s handling and fellow panelist Orlando Gutiérrez-Boronat, co-founder and spokesperson for the Cuban Democratic Directorate.

“What transpired was nasty, toxic, disrespectful, and premised on disinformation,” stated Eckstein in the column.

“It is insulting that it is open season for Cubans when scholars like you come to this community and say the things you said.”

What originally began as a small-scale academic event centered on the unique US policies historically afforded to Cubans became a political stage to attack a perceived threat.

The Dec. 9 book signing-turned-panel was controversial since its announcement on Nov. 9.

Originally, the event was set to be a run-of-the-mill book signing event. Eckstein would have presented her work, followed by a brief question and answer period, finally ending with the book signing.

Three weeks after its announcement, the post had accumulated nearly 700 comments on Instagram, a majority of which accused Eckstein and FIU of anti-Cuban racism and discrimination.

“As an FIU Alumni, it is shameful to see this type of narrative shared and supported by the university,” wrote Monica Perez, Hialeah city council vice president.

In an attempt to curb the ever-increasing media attention, FIU President Kenneth Jessell acknowledged the backlash in a public statement, stating that though FIU holds academic freedom as its guiding principle, the university would enact the changes needed to create a “balanced and objective” discussion.

The event moved onto campus with an increased security detail and took the form of a panel, inviting Gutiérrez-Boronat in order to discuss more generally the US’s treatment of Cuban migrants.

Coverage from traditional media also influenced this reading of Eckstein as holding contempt against Cubans.

However, both events were mentioned within the text in chapters three and five, with a description of the respective hardships Cubans faced preceding their trek and in the case of the balsero crisis, while detained by the US.

“The Cubans detained both in Guantanamo Bay and in Panama, angry about their imprisonment, their uncertain future, and the deplorable conditions under which they were forced to live, had staged protests, rioted, and self-mutilated,” writes Ekstein on page 193 of her book.

Unlike its disheveled ending, the event began with the professionalism asked for by the moderator and Director of CRI, Jorge Duany.

“It is our intention, as I said already, to have a civil discussion where everyone who wants to speak can do so, and wait your turn,” said Duany. “Anyone who attempts to disrupt this event will be asked to leave the auditorium.”

Ekstein began her abbreviated presentation by highlighting the benefits received by Cubans historically. Examples included the interplay between the Cuban Adjustment Act of 1966 and US policy and the mass paroling of Cuban refugees post-1959.

“In many respects, you did not have an unauthorized or illegal Cuban in this country, thanks to the combination, first of the parole status then of Cuban Adjustment Act,” said Eckstein.

Clinton furthered these benefits through the inclusion of Cuban immigrants in the 1996 Personal Responsibility and Work Opportunity Reconciliation Act.

She would also detail the various special statuses allotted to Cubans throughout the latter half of the 20th century, allowing them to enter without the requirements placed on all other migrants.

“The US said, if you came in after 1959, you did not have to prove that you were a victim of persecution, which is part of the definition of refugees by the United Nations,” Eckstein.

Also pointed out was the Refugee Act of 1980 in relation to the Mariel boat lifts, many of whom would have been excluded due to the Act’s refugee caps, leading to the creation of the “Entrants: Status Pending” status.

Eckstein then detailed the changing reasoning behind this preferential status, beginning with Cold War politics and the rise of Castro’s regime.

“It was an instrument of foreign policy…Washington was thinking this would, first of all, deplete the human capital of Cuba,” said Eckstein. “The fact that so many Cubans were coming, was also thought to delegitimize the Cuban government.”

Post-Cold War, the continued treatment was cemented through the rise of Cuban political action committees, Cuban-American politicians, and the political activism of the Cuban American diaspora.

“Ordinary Cubans with their votes have been very influential too,” Eckstein. “Cubans vote in very high percentages”

The comment would elicit the only applause Eckstein would receive exempting the cordial applause at the presentation’s conclusion.

She would also discuss the erasure of this preferential treatment that had begun under former President Obama, most significantly, repealing the ‘wet foot, dry foot’ policy, which had allowed Cubans to enter outside the traditional legal port of entry.

Gutiérrez-Boronat’s introduction would redress the stage’s academic decor to that of a political debate, reframing the entirety of the conversation within his first few minutes.

“Make no mistake, this is ultimately an inquiry into the truth about Cuba, and into the nature of the regime that Cuba suffers from,” said Gutiérrez-Boronat.

He would also, in one of the few positive remarks allotted to Eckstein, praise her for coming, presenting, and being open to critique.

This did not soften his critique, however, as he began by contending that Eckstein’s foundational premise is that Cubans are “imagined refugees” who escaped due to their “lifestyle being at risk.”

“She repeated here again that Cubans do not qualify as refugees,” said Gutiérrez-Boronat. “I think this is fine as opinion, but opinion or doxa is inferior to science.”

With this, Gutiérrez-Boronat transitioned the conversation away from the overall premise of the work: understanding why Cuba has received these beneficial policies compared to immigrant groups who face similar conditions.

Eckstein’s use of Haitian migrants during Jean-Claude “Baby Doc” Duvalier’s dictatorship was meant as a parallel was meant to exemplify this due to the comparable levels of political repression, extrajudicial killings, erasure of press freedom and freedom of speech.

Instead, his presentation framed Eckstein as a compromised scholar, unsympathetic to the plight of Cubans, attempting to pass her political opinions as scholarly work.

The crowd erupted into applause and cheers, their silence to the event slowly ceasing.

“Dr. Eckstein’s ideological bias is described by her repeatedly throughout the book; I have many quotations, but I’m going to summarize it as this,” said Gutiérrez-Boronat. “It is her belief that the regime in Cuba is an anti-imperialist force, which although somewhat repressive, embodies Cuban national self-determination.”

Scattered groans and sighs emanated from the audience.

“Not understanding that we are dealing with a totalitarian regime in Cuba prevents you from correctly assessing whether Cubans, exiled Cubans, faced persecution or well-grounded fear of persecution,” said Gutiérrez-Boronat, continuing by listing the various human rights cases of abuse committed by the Castro-led government.

How this connects to Eckstein’s approach is unclear, as her book sets out to understand the reasoning behind US Cuban immigration policy. She does not refute the hardship faced by Cubans, as made clear in the Miami Herald article.

“If you do not take into account the reality of per capita repression, if you disregard the abundant literature on the scale of mass repression in Cuba as Professor Eckstein in this book at least has done,” said Gutiérrez-Boronat, “only then can you arrive at the conclusion that Cuban exiles as the US government’s definition of refugee were not either persecuted or had founded fear of persecution.”

Also included within Gutiérrez-Boronat’s list of omissions was the treatment Cubans received during the process of emigration.

“Furthermore, Dr. Eckstein doesn’t account for the fact that when you ask to leave Cuba legally, that marked you, and you were punished,” said Gutiérrez-Borona. “I know it firsthand: my parents lived it, they spent five years trying to get out of Cuba.”

In reality, Eckstein does acknowledge this hardship in chapter 3 page 84; the same page Gutiérrez-Boronat cited earlier in his presentation when discussing the Castro regime’s use of actos de repudio, or acts of repudiation against those attempting to leave legally.

Ending his presentation, Gutiérrez-Borona would reemphasize that Eckstein’s work fails to understand, “our community, what we’re about, what we stand for, why we function as we function, and why we keep dreaming of a free Cuba.”

He would receive an eruption of applause and cheers, various audience members standing in commemoration.

Duany subsequently took the stage to announce the beginning of the question and answer period, asking audience members to keep questions short as a means of maximizing participation, though his words did little to sway the fervor exuding from the audience.

The crowd would make itself known throughout the question and answer period, cheering, chanting, and heckling their judgments.

“Do you understand that the Cuban American community has advocated and has been involved in the reform effort to include fairness for everyone?” Gómez asked. “Did you consult with the lawyers who do this?”

Eckstein would retort that while this is true for Cuban advocates and political figures it did not extend diaspora at large. She also acknowledged while these acts were similar and inspired by the CAA, though with an expiration date, a key difference that has indefinitely extended benefits for Cubans.

Cuba Liberty Council co-founder Ninoska Pérez Castellón would incite the crowd into cheer, accusing Eckstein of holding sympathies for the communist government, and actively attempting to silence the human rights violations of the regime in her text.

When asked by Duany if she had a question for either speaker, Pérez Castellón responded, “I don’t have a question, I just feel I have to tell you this.”

The response would elicit the loudest applause and cheers of the night.

Pérez Castellón would remain seated throughout the rest of the event, regardless of her interruption.

Student Government Association Senator Delano Cicconi would follow up, accusing Duany and the CRI of censoring online discussion and blocking his account.

“How can you claim this is an open mic discussion for truth when you block comments and use the same tactics as the Castro regime itself?” said Cicconi. “Maybe you should change the name from Cuban Research Institute to Communist Regime Indoctrination.”

After another round of cheers, Duany stated that had been taken to limit commenting was due to the use of foul language and personal insults not appropriate for a free, open and academic discussion.

Hinting at Cicconi’s CRI insults, he also mentioned the improperness of personal attacks.

There were also those in support of the work, commending Eckstein’s historical analysis, and use of Haitian migrants as a means of conveying the effect of these policies.

Others quipped about the change in event and venue as well as the treatment of Eckstein’s work.

“Is there going to be a book signing? Because I thought the purpose of this was the book signing,” said one attendee

Yet, they would pale in comparison to those supportive of Gutiérrez-Boronat interpretation. Emboldened by FIU’s reluctance to eject audience members, their heckling increased as the conclusion of the event drew near.

Notably, audience members yelled “not true” while Ekstein described an alleged occurrence in which a boat filled with both Haitians and Cubans arrived in Florida, only for the Haitians to be deported.

Eckstein’s subsequent “excuse me”  would only elicit laughter and cheers.

Their chants would be the final words of the night.

Thanksgiving is no longer an Anglo-American tradition

Be the first to comment on "“I thought the purpose of this was the book signing”: Unraveling FIU’s Cuban Research Institute’s chaotic “Cuban Privilege” panel"