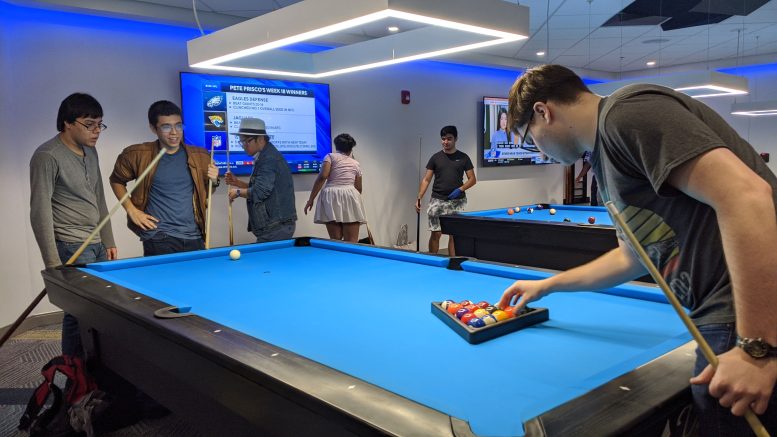 Students enjoy a game of pool during the Jan. 9 reopening | Elise Gregg, PantherNOW

About a year and $1 million later, the Modesto Maidique Campus finally has its renovated Game Room.

Student Government hosted the room’s grand reopening on the first day of classes, Jan. 9. The morning celebration was packed despite short notice from SGA about the reopening.

The space by Alamazar’s and Chili’s saw students showing up as early as almost an hour before SGA kicked it off at 10 a.m., eagerly trying to peek into the renovated game room.

While waiting, students could be heard reminiscing about how it was a spot they used to study and hang with friends, excited to see the makeover.

“I used to use the old game room, but it was kind of a small space and lots of people were usually there,” said senior Rachel Gordon, who is studying animation. “I’ve kind of missed it.”

For Senate President Alex Sutton, the new TVs and video game systems are the best part of the new room.

“Before, I think people would just come to hang out, maybe play pool,” said Sutton. “Other than that — not so much of a game room.”

The event was hosted by current SGA leaders as well as former SGA president Alexander Rubido, who all but entirely directed and decided on the Game Room renovations alone during his administration in an unprecedented expansion of executive power.

“And with this, the Game Room is opened!” Rubido exclaimed, cutting the ribbon with current president Cristhofer Lugo around 10:30.

The ribbon hit the ground and students surged forward, anxiously crowding into the room to admire the updates and get some free food.

Rubido spearheaded the project during the twilight of his presidency, leaving the vast majority of the execution to Lugo.

“It’s all for the students,” Lugo told PantherNOW. “I was willing to take up that extra load of work.”

Lugo’s gratitude notwithstanding, it was Rubido who not only funded the project through executive orders that allowed him near-total discretion in budgeting starting fall 2021, but also headed the Student Space Improvement Commission as chair, hand-picking other SGA members to fill vacant spots. The game room, in essence, was a Rubido project from start to finish.

Rubido was also excited to see the results though he was out of office.

“I think that’s one of the great things about student governance: we can start projects but sometimes we don’t get to finish them,” said Rubido during an interview. “We give them on to the next group, and it’s fantastic that this current student government administration carried on that effort.”

Senate President Alex Sutton agreed, adding that it wasn’t just an effort between two different administrations, but a project that the student body as a whole was a part of.

“I think it was a win for everybody involved,” said Sutton. “This project is bigger than any one person…it really is something that transcends more than one year and a few individuals.”

Though a finished game room was promised much earlier, the renovations were completed nearly a year later. According to Lugo, supply chain and permit issues dragged down SGA’s timeline.

“We were trying to open it for homecoming, but we had issues in getting lights,” said Lugo. “The city was not going to give us the permit, not even to soft launch.”

“Every time we heard back from the supply company…there was always a delay.”

It was a total redo – walls were removed to open up the space, carpeting and furniture were completely changed, and decor was given a more modern update.

Students can now also enjoy pool, video games from Pac-Man to NBA 2K, a kitchen space and areas to study or sit with friends.

Student government was responsible for most of the funding, as well as selecting much of the decor and amenities.

Other funding came from the Graham Center, which also did much of the work coordinating with contractors and architects.

“SGA funded it and basically approved and led, while we facilitated all the logistical needs for the construction and installation,” Sanyo Mathew, assistant vice president of auxiliary operations for GC, said in an interview.

However, Lugo said the current SGA administration mostly oversaw the process, with most of the decisions already made by Rubido.

Renovations aren’t the end though – Lugo still has his own plans on how to manage the game room under his administration.

“We are having conversations with the Graham Center to see how we can make it free for students,” said Lugo. Before, students had to pay to use the space and its amenities.

Though there’s more work to do (the doors are still missing), Lugo is satisfied with the outcome.

Be the first to comment on "It’s back: SGA reopens renovated MMC Game Room"