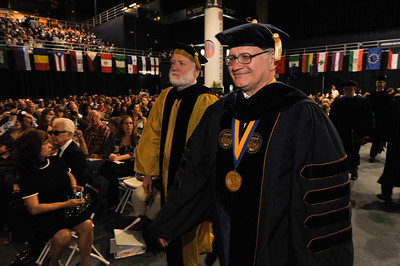 Former president Mark Rosenberg is set to return to campus, though he won’t be stepping foot in the classroom.

Rosenberg will transition from teaching to a position working on a research project for the Jack D. Gordon Institute for Public Policy this spring semester.

Rosenberg still remains a tenured faculty member and will be paid his negotiated salary of $376,933, though his focus will shift from teaching to planning.

According to Maydel Santana, spokeswoman for the university, Rosenberg’s work will be in “planning, curriculum and strategy on a grant.”

His new position sees him serving as a “connector” for the Gordon Institute, which just received a grant of $5 million from a private donor who has yet to disclose themselves.

Rosenberg will be working with Fonseca and the institute to “develop and implement a plan for a sustainable university-wide cyber policy research and education program.”

The news of the transition comes following statements opposing Rosenberg’s return from the Hispanic and Black Faculty Associations after the announcement that he’d come back as a tenured professor.

PantherNOW reached out to several members of the Hispanic and Black Faculty Associations, all of whom were unavailable for comment at the time of printing, though an updated story may be available online.

Before his transition, Rosenberg was set to teach two classes; one solo and another team-taught.

However, according to original reporting by the Miami Herald, his solo class “Politics of South America” was canceled when only six out of 45 seats were filled.

In an interview with PantherNOW, Fonseca explained what Rosenberg’s new role will be specifically.

“What I’ve asked him to do is to help me build a strategy, help me pull the colleges together and work with administrators,” said Fonseca. “Then help me implement that strategy and help me to develop the right portfolio of programming that will generate revenue so that we can continue to build and leverage that capability beyond the lifecycle of the grant.”

Fonseca also mentioned how he had been in talks with Rosenberg for months before the semester on having him help with the project.

“I reached out to him September 13, we met September 14, that’s where I laid these problems out. And he provided me some feedback,” Fonseca said. “Part of that feedback included thinking strategically about how you plan to execute over the subsequent months…I wasn’t notified until December 22, that our leadership made the decision to support my request of having Dr. Rosenberg’s support.”

University weighs in on Obamacare

Be the first to comment on "Former president Mark B. Rosenberg no longer returning as FIU professor"