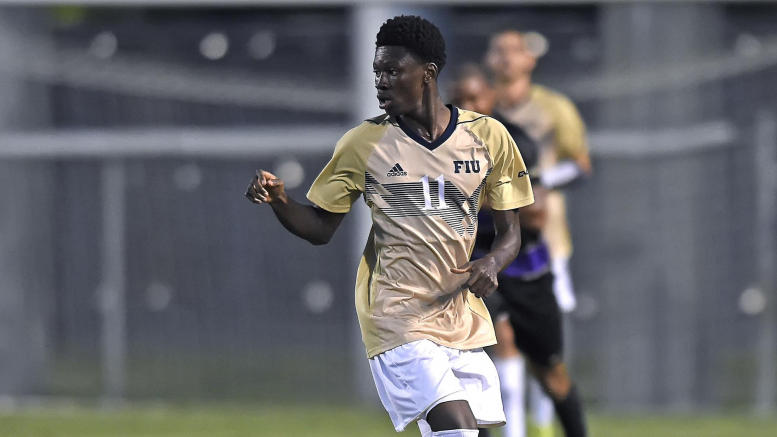 FIU is off to a strong start to their 2021 campaign, routing the 13th ranked Central Florida Knights by a score of 4-0 on August 26.

The Panthers have dominated the matchup against UCF lately, winning four of their last five matches. The two teams met for the first time in 2006, with FIU holding a 6-5-1 all time record against the Knights.

FIU wasted no time in opening the scoring against UCF, with German-born forward Rasmus Tobinski fired a shot on goal which the goalkeeper could not contain, and Tobinski capitalized to make the score 1-0 in the third minute.

UCF fought back, attempting to equalize the score in the 10th minute with a shot that took a bounce off of the left goal post. The Panthers were forced to make a save in the 30th minute as former FIU player Alessandro Campoy placed a shot at the bottom left of the goal, but goalkeeper Grant Makela made the save with sure hands.

Just four minutes after the save, FIU doubled their lead to strengthen their hold on the contest. Freshman forward Bernado Dos Santos Monteiro rifled a shot into the right side of the goal after junior defender Philip Hildebrandt set him up with a well placed assist. At halftime, the score was 2-0 in FIU’s favor.

The Panthers continued to dominate the game, scoring a third goal in the 68th minute. Midfielder Matias Barraza lofted the ball into the penalty area on a set piece opportunity, and defender David Garcia elevated to meet the ball in the air and head it into the back of the net.

FIU completed the blowout in the 84th minute when midfielder Stephen Afrifa showed off his pace by outrunning the UCF defenders and netting a fourth goal for the Panthers. The contest finished 4-0 as FIU completed the shutout victory on the road.

The Panthers traveled to Fort Myers three days after routing UCF, where they defeated the Florida Gulf Coast Eagles by a score of 1-0 in an overtime thriller.

The game was delayed due to lightning in the area, but FIU’s focus did not waver as they secured another shutout victory and a third straight win against the Eagles. The narrow 1-0 scoreline does not tell the story of this contest.

The Panthers were able to get started with an early shot on target by Afrifa, who forced a save at the bottom right of the goal. FIU continued to apply offensive pressure and found the back of the net in the 14th minute, but the goal was disallowed due to an offside call.

FIU continued to fire at goal for the remainder of the period, with Bravo, Afrifa, Tobinski, and Hildebrandt all recording shots on target. The Panthers dominated offensively in the first half, with 10 shot attempts to FGCU’s two and were stout defensively as well. They did not allow the Eagles to tally a single shot on target.

FGCU did not record a shot on target until the 58th minute of the match, when Makela made a convincing save at the bottom right corner. While FIU continued to apply offensive pressure, the Eagles’ goalkeeper was shown a red card in the 70th minute for a challenge during a Panthers counter attack. The Panthers could not capitalize off of the set piece opportunity that followed.

The second half ended with both teams tied 0-0, despite FIU’s dominance on both sides of the ball. The breakthrough came in the sixth minute of the overtime period when Garcia lofted a ball towards the far post and Hildebrandt high-pointed the ball, guiding it into the top corner to seal the 1-0 victory over FGCU.

Hildebrandt was named Conference USA defensive player of the week for his efforts this past weekend. He contributed an assist in the victory over UCF, the game winning goal against FGCU, and played an instrumental role in keeping the clean sheet in both games.

The Panthers became the #19 ranked team in the nation as a result of both victories, with a matchup against the #12 ranked Virginia Commonwealth Rams on Saturday, September 4 at 7 pm.