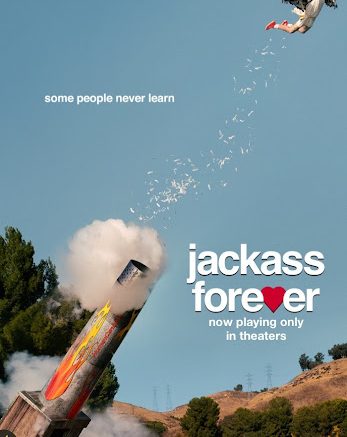 After a 12 year gap, the “Jackass” crew has made a return that many fans did not expect to see. Viewers wondered if these original daredevils, who are now almost 50, still got it…and they do.

The “Jackass” franchise started as a TV show airing on MTV from 2000 to 2002. It included many of the main cast which we still know today such as Johnny Knoxville, Steve-O, Ehren McGhehey, and Wee Man.

As the main cast reunited for this film, many new members joined and even celebrity appearances from Tyler the Creator and Machine Gun Kelly were included. This adds a level of humor, seeing how people’s favorite celebrities will react to these insane scenarios that they are put in.

With the newcomers, it makes the film feel like a legacy is being left behind. The new faces were a fresh take, as the long-running fans had no idea how they would react to the stunts.

“Jackass” has never been for the faint of heart, and that doesn’t end here. The stunts performed are graphic and dangerous, leaving viewers curling up in their seats, but keeping their eyes open to see if they can pull it off. Many times the audience joins in on the fun, determining whether or not they themselves would be able to complete the stunt, and the answer is almost always no.

By including old video footage and re-doing old stunts, but with a new twist, a sense of nostalgia was included throughout the film., The audience wondered if this film would be toned down compared to the others as the cast is getting older, but this was not the case. Knoxville is still getting in a ring with a bull just like he was twenty years ago.

Every stunt performed in the film is dangerous, but what really stands out is its creativity. The creators of the stunts don’t just want to see how extreme it can be but admire the humor it can have. The stunts include a story and a clever name, such as the fall of Icarus where Knoxville wore wings and was shot out of a cannon to fall five stories into the water. They also included many sketches and bloopers.

What ties the stunts together is the cast attitude. “Jackass Forever” is able to perfectly balance humor and pain. They are all in on the joke and dedicated to where they will not back down. Even after a serious injury, Steve-O is on a stretcher smiling ready for the next stunt.

Many who are fans wonder why these films feel so special when there are thousands of stunt-heavy duplicates. The thing about this franchise is that there is no formula. The dynamic the crew has is something built from many years of friendship and trust that is so authentic.

The main joy that fans have while watching these movies is seeing the cast back together. Many of the “Jackass” crew have had hardships including substance abuse, injuries, and the loss of their close friend Ryan Dunn. Seeing the familiar faces back on-screen having fun makes audiences glad to see how far they have come.