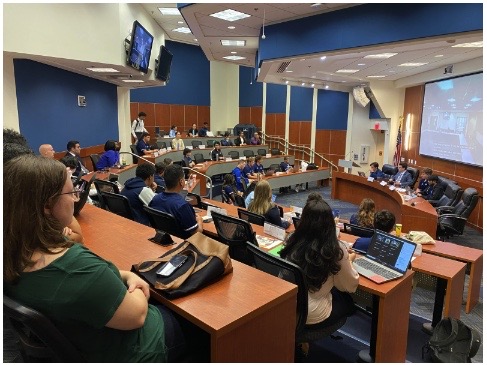 After a slow summer semester, SGA has started the fall by filling several judicial branch positions, as well as filling the remaining vacancies of graduate senators.

Accomplishing most of their Aug 29 agenda, the senate confirmed an attorney general, one of four associate justices, and picked three graduate students to fill the remaining seats, allowing the Graduate and Professional Student Committee to begin having meetings.

The judicial branch confirmations mark the first of many initiatives SGA President Cristhofer Lugo has been pushing for since his election, especially considering there has not been a complete judicial branch within SGA for over a year.

Attorney general nominee Cas Cater went first, speaking about how she would work to provide accessibility and accountability between students and SGA. With a vote of unanimous consent, she received the position.

“In order for the student government to function properly, the general student body also needs to be involved and they need avenues they can pursue if they have an issue with the way things are being done,” said Cater. “Every student in the student body is entitled to those rights under our constitution, but they can’t be exercised without an attorney general to fill the position.”

Next were the four nominees for associate justices. Of the first two nominees to go up only one was confirmed–Maria Pujol.

The Senate did not manage to go through all associate justice candidates because of time spent on graduate senator confirmations.

Five candidates competed for three open spots. Each candidate presented their case, after which the senate went into discussion to pick the best three. In the end, Haley Dawson, Arturo Barahona and Nick Kukuk were chosen.

“It was a high priority to fill those seats,” said Senate President Alex Sutton. “We haven’t had a Graduate and Professional Student Committee, which allocates $240,000 to fund graduate student research and events.”

The last of the judicial candidates will be up for confirmation Sep 5.