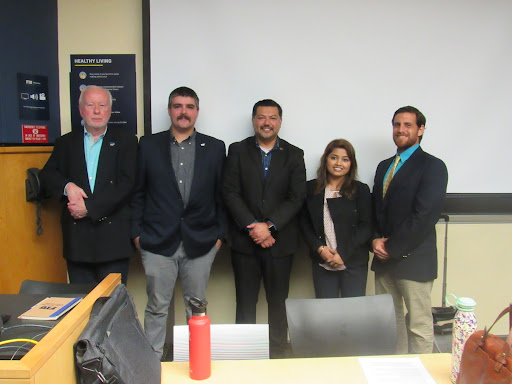 The FIU Mohsin and Fauzia Jaffer Center for Muslim World Studies held a panel discussing the ongoing flooding crisis in Pakistan on Thursday, Sep 22 in the Ryder Business Building.

Floods in the south Asian country began in June, killing an estimated 1,600 citizens through its direct effects and displacing 33 million amid melting glaciers and its highest rainfall in three decades.

In total, Pakistan has incurred between $15 and $30 billion in damages according to Ph. D. candidate Umer Rahman, who added that official counts are incomplete and rising by the day.

Panelists discussed a variety of topics pertinent to the crisis, including the impact of climate change, political tension and other factors delaying response efforts.

Olson, who is the Director of the Extreme Events Institute as well as a professor, cautioned the reported death toll may not be entirely accurate and could be mishandled by government authorities.

Waterborne diseases spurned by the flooding – which is believed to cover a third of Pakistan’s entire territory – have also begun to affect displaced populations. In the southern Sindh province, hundreds of thousands of illnesses relating to the flooding such as gastroenteritis, malaria and dysentery have been recorded.

Ashraf spoke about the crisis from a political and security standpoint, arguing it could lead to an increase in support for radical groups who seek to exploit the tragedy and gain goodwill, which occurred during flooding in 2010.

“It damages the government’s legitimacy and image to the people, and of course exposes people to the extremist agenda of these groups,” said Ashraf. “And the goodwill generated [by] their aid relief efforts by these terrorist organizations, they can use it to further their influence on politics in the country or maybe even foreign politics.”

Liguori argued that the crisis – as well as the causes leading up to it – were heavily influenced by political decisions and mismanagement on behalf of the Pakistani government, resulting in unequal effects on poorer populations.

“Natural disasters aren’t always natural. A big part of natural disasters have to do with the political decisions made beforehand, the distribution of people and of resources, the more vulnerable population who are situated in more hazardous areas, and in the political effects and responses that are then made in the aftermath,” says Liguori.

Guerreiro rounded out the panel by addressing the role of climate change in the origins of the disaster, stating that its exact impact is currently inconclusive.

He also highlighted Islamabad’s past environmental and infrastructure mismanagement as well as disaster relief policies enacted by the government as factors in worsening the response.

“It’s not like the policy makers in Pakistan had no idea this could happen,” said Guerreiro. “Along with climate change, this is a political problem – it takes 50-100 years in the making. A lot of policy ended up exacerbating it.”

A question and answer period followed the panel where audience members questioned the panel in regards to the potential political, social and environmental impact of the crisis, with Guerreiro closing the panel by encouraging audience members to take initiative in combating climate change.