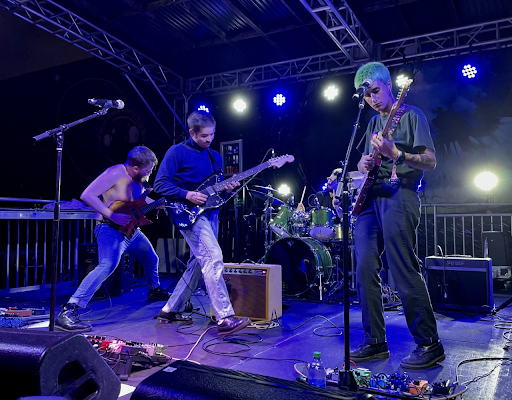 The two-day festival took place on Oct. 21 and Oct. 22 in Wynwood’s Mana Convention Center, opening its gates around sunset to welcome guests.

Beginning in 2013, the III Points festival’s founders aimed to showcase Miami’s lesser-known music scene. Despite international artists such as Rosalia and JOJI headlining the festival, the founders remember its roots and feature local artists.

Miami is house and electronic music central, so many local artists only needed their laptop, a mixer, and a turntable. But in the middle of the festival grounds, the Vision stage erupted with heavy sounds as Miami’s rock bands started their sets.

Formed out of a love for alternative and emo music, Frog Show Mercy’s members add their own music influences to the band’s collective sound, like hip-hop and punk.

“They hit us up, and we totally freaked out,” said drummer Javi Nin when asked how the band was invited to perform at III Points. “To be hit up when we’ve been playing for less than a year was an honor.”

III Points contacted artists several months in advance in order for them to secure their spot. The festival also hosted an open house contest for local acts this year, giving the winners a chance to perform.

This year’s open contest winner was alternative rock band Do Not Air, who played their set just after the gates opened to guests.

After meeting in high school, the band began playing live shows with other local bands and developed a unique stage presence along the way.

“There’s a good amount of our stage show that’s all improvisation,” said bassist Nahuel Gallardo. “So every time we play our set, people get to see something different every single time.”

The bands listed their favorite local acts such as Mustard Service, who have been playing shows and releasing music since 2015.

One of the bands mentioned as a favorite was the heavy alternative rock band MOLD!, who played late on the first night of the festival.

The band’s creation speaks to Miami’s unique heritage, which takes characteristics from many different cultures to create a sound not found in any other part of the U.S.

An issue that all three bands discussed was the lack of venues in Miami. Because of this, the bands consider the festival to be a good platform for local acts, despite the lineup being filled with more popular, international artists every year.

“So many of these artists I grew up listening to in high school,” said Frogs Show Mercy guitarist Lazarus Matus. “I never thought I would get to be on the same lineup as them, which is so cool.”

Meet the band that plays on top of Red Parking Garage