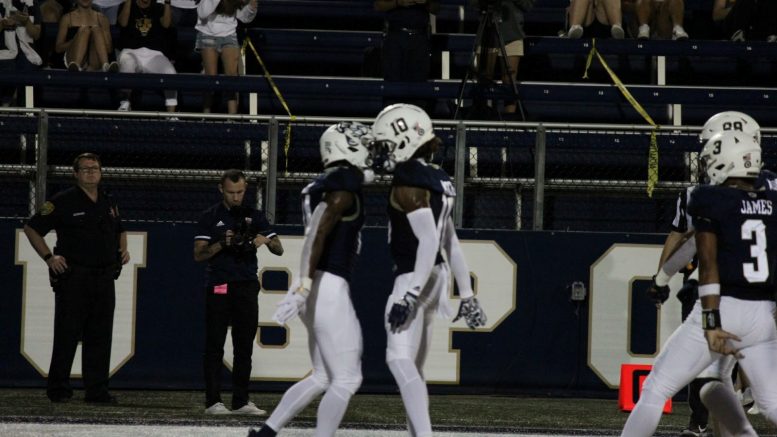 FIU receivers Jalen Bracy and Kris Mitchell celebrate after a touchdown in the 42-34 win over Louisiana Tech. Photo by Adrian Valdiva

Following a decisive 42-34 win over Louisiana Tech, FIU hits the road to the Lone Star State once again for a conference matchup against the North Texas Mean Green on Saturday in Denton, Texas.

The Panthers sit at .500 through eight games with a record of 4-4 and a C-USA record of 2-2. FIU is currently on a two-game winning streak with victories over the 49ers and Bulldogs, looking to make it three straight wins for the first time since 2019.

In their double overtime win against Louisiana Tech, the Panthers found themselves down ten in the first half, only to go on and score 25 points in the remainder of the game for their fourth win of the season.

“Grayson has kept maturing as the year has gone along and has a good feel for the passing game,” FIU head coach Mike MacIntyre said in his weekly press conference.

Over the past two weeks, James has thrown for 621 yards with four passing touchdowns and two rushing.

On the defensive side of the ball, the linebackers continue to step up. Donovan Manuel and Gaethan Bernadel each had 10 tackles Friday night, while defensive back Demetrius Hill added 10 tackles of his own. Hill is third on the team in tackles with 66.

For the North Texas Mean Green, they come in with an overall record of 5-4, including a conference record of 4-1, winning four of their last five games.

Last time out, North Texas eased their way to a win with a 40-13 victory over the Western Kentucky Hilltoppers in Bowling Green, with 541 yards of total offense in the afternoon.

The Mean Green are led by fifth-year quarterback Austin Aune who is finding success in 2022, throwing for 2,339 passing yards and 23 touchdowns, which sit third in passing C-USA.

“(Austin Aune) makes a lot of plays, he can run but also can make plays with the arm and they’ve made a lot of big plays offensively,” MacIntyre said.

The ground game for North Texas has been a success, averaging 219.9 rushing yards per game and second in the conference. Ayo Adeyi is the main back in the Mean Green offense with 631 rushing yards on three touchdowns.

If FIU wants to escape Texas with their fifth win of the campaign, it comes down to stopping the North Texas run game. The Panthers are averaging 163.5 rushing yards to their opponents, finding success in the last two victories, giving up just 122 rushing yards via the ground.

Another key is limiting the potent North Texas passing game led by Aune. Look for defensive backs Andrew Volmar and Hill to put heavy coverage on the big play receivers for North Texas.

The FIU offense will need to step up once again with Grayson James under center. He continues to improve throughout his sophomore season and an important conference matchup will be key for James progressions. Expect Chambers and Mitchell to be key players through the air for the Blue & Gold.

Kickoff from Apogee Stadium is slated for 4 PM and will be streamed on ESPN+.