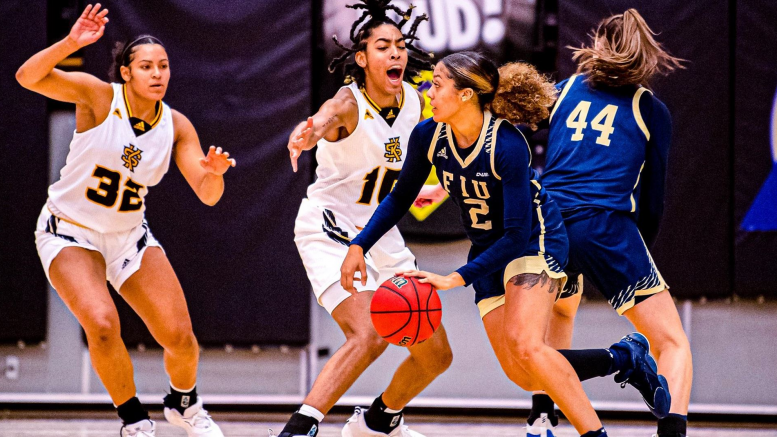 The FIU Women’s Basketball team traveled to Georgia to take on the Kennesaw State Owls on November 15 and Georgia Southern Eagles on November 17, splitting both games.

FIU dominated the Owls with all around better shooting and rebounding despite their 24 turnovers in which Kennesaw failed to capitalize on.

The game began with a fast start from Kennesaw State’s defensive end as they didn’t allow FIU to score for three straight minutes while going on a 4-0 run themselves.

This run for the Owls didn’t last long as the Panthers were able to quickly compose themselves and find a rhythm, going on a 7-0 scoring spree that put FIU ahead for the rest of the game.

The bench for FIU kept them in motion back to life as they collected 15 points while going 3-6 from deep including a spectacular half court shot from forward Ariel Colon that gave FIU a 23-16 lead at the end of the first quarter.

The Panthers were able to maintain their defensive pressure by converting two threes on Kennesaw’s seven turnovers giving them a 34-27 advantage going into the second half.

Heading into the third quarter with momentum on their side, FIU torched the Owls with a perfect 9-9 from the field while being 4-4 from deep with the catalyst being guard Olivia Trice scoring back-to-back threes on the Panthers first two possessions.

With a 19 point advantage and 6:45 minutes left to play in the fourth, there wasn’t much that the Owls could do to muster a comeback as they struggled to make the game competitive, giving the Blue & Gold their first road win of the season.

The final score was 67-57 with an impressive performance by Colon who had 12 points, eight rebounds and five assists for the Panthers. Forward Kyla Nelson also tallied 10 points and four rebounds alongside Trice with 11 points on 75% shooting from deep.

Against Georgia Southern, FIU was able to keep up with the Eagle’s 8-13 field goal shooting by staying strong on the defensive end, forcing seven turnovers allowing the Panthers to stay in the game at 14-22 at the end of the first quarter.

FIU managed to convert another seven turnovers along with four steals in the second quarter but Georgia Southern’s offense proved to be a bigger challenge for the Panthers as the Eagles continued their scoring streak, ending the half with a 26-39 lead. Freshman guard Zaida Gonzales led the half for the Panthers in scoring with eight points.

The Panthers began a complete turnaround in the third quarter as they managed to outscore the Eagles 23-11 with the help of a 9-0 run and the ability to out rebound the Eagles on both boards. FIU also managed to get 12 points in the paint thanks to guard Grace Hunter and freshman guard Tanajah Hayes putting the team one point behind at 49-50 going into the final quarter.

Center Hope Butera was able to get a steal and get the layup giving the Panthers their first lead of the game with  51-50 with 8:18 minutes left in the fourth quarter.

There were six lead changes in the final quarter that would eventually end in a tie thanks to forward Emerald Ekpiteta who sank two free throws and made a clutch layup with six seconds left forcing the game into overtime at 69-69.

Unfortunately for the Blue & Gold, they were unable to maintain their momentum in overtime as the Panthers fell short due to turnovers and constant foul trouble, ending the game with a final score of 81-74 and an Eagle win.

FIU now holds a 2-2 record for the season while Georgia Southern advances to a perfect 3-0 record.

The Panthers got impressive performances out of Hayes who led the team with 19 points on 70% shooting alongside Hunter with 13 points and Gonzales with 10 points. Other notable performances include Ekpiteta who got a season-high 15 rebounds as well as earning 12 points.

The Panthers will return home next week where they will play back-to-back games against the Chicago State Cougars on Friday November 26, and the Eastern Michigan Eagles on Saturday, November 27 in FIU’s Thanksgiving Classic.