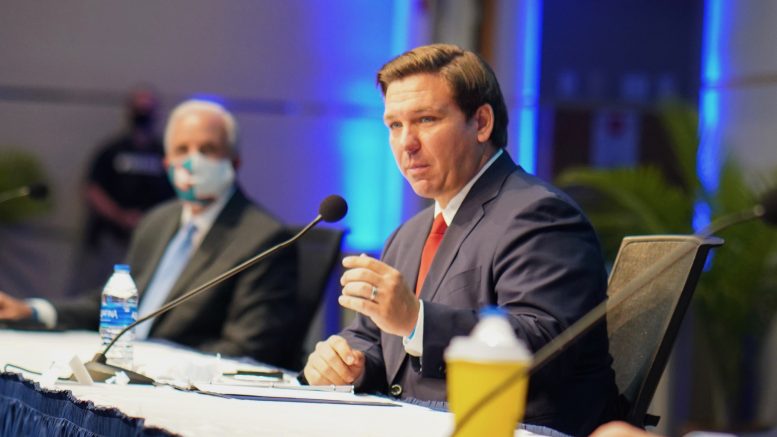 Ron DeSantis at a press conference at FIU in June 2020. Photo via FIU Flickr.

As Florida Gov. Ron DeSantis continues to make immigration enforcement a priority in his agenda, the House State Affairs Committee approved a bill during the annual legislative session on Feb. 18 that would expand a 2019 law banning the establishment of sanctuary cities in the state.

Although the term “sanctuary city” is not an established definition, it refers to a city that protects undocumented immigrants living in it from being prosecuted under federal immigration policies.

Miami-Dade County is considered by some to be a sanctuary city, although it is not legally recognized as such.

Under the Trump administration in 2017, Miami was no longer considered a sanctuary city as part of a push to reverse sanctuary city policy nationally.

Two parts of the law were blocked by U.S. Southern District Judge Beth Bloom last September over unconstitutionality and were partially based on “biased and unreliable data”.

The state later appealed the ruling, labeling Judge Bloom an “Obama judge” who was misled.

As the bill progressed through the state legislature, doubts and fears grew not just for immigrants in Miami, but also for the international community at FIU.

Luis Moros, a sophomore studying political science and public administration, is an international student from Venezuela who shares concerns over the ban on establishing sanctuary cities. He is an asylum seeker residing in Miami.

“I think [the ban] will really impact international students at FIU because they will be afraid of pursuing their education at FIU or any other university in Florida,” said Moros, who moved to the U.S. in 2016.

The bill, HB 1355, was approved by a 15-8 vote with heavy support from Republican lawmakers, who backed DeSantis’ criticism of federal immigration policies.

“To put it bluntly, I think what this bill is trying to do is stop the federal government from conducting a human trafficking operation,” said John Snyder, a Florida Republican lawmaker and supporter of the bill.

The continuing efforts toward fortifying immigration enforcement have drawn criticism from Democratic lawmakers and religious leaders who claim that it is a danger for unaccompanied children and other immigrants relocating to sanctuary cities.

Along with the attempted ban on sanctuary cities, DeSantis also directed the Department of Children and Families to halt the issuing of licenses that provide shelter to unaccompanied children.

The number of unaccompanied minors entering the United States is increasing, according to the Office of Refugee Resettlement under the U.S. Department of Health & Human Services.

Moros also spoke on the potential financial impact of the sanctuary cities ban.

“If you go back to different reports, studies and critical analyses by different researchers, you’re going to notice that the first cause of migrations is because people cannot afford education in their countries,” said Moros. “Migration is not a choice, it’s a necessity because human rights, such as access to education, have been violated in their country of origin.”

Ernesto Fiocchetto, an international graduate assistant from Argentina working at the European Center of Excellence, agreed.

“I’m always thinking if these kinds of things continue to happen, will I be able to get my Ph.D.? One can think this is a selfish situation,” said Fiocchetto. “However, I also think that I have contributed a lot to the university and the city.”

Fiochetto also emphasized why it’s important to empathize with immigrants.

“I’m not a citizen, so therefore, I shouldn’t have the rights that every citizen has, but I’m a human being. And I should have my main rights,” said Fiocchetto. “I think that’s something that we have to consider at some point.”

Many international students contribute to the “brain drain” phenomenon–or the emigration of highly intelligent students from a country with few educational and professional opportunities–to the universities and job markets of the U.S. and Europe.

Nearly 90 percent of Latin American migrants travel to developed nations for better employment opportunities, as reported by the World Bank.

“[Banning sanctuary cities] doesn’t really coincide with the core problem with immigration reform as a whole. I think within the Miami and FIU community, you’re going to see issues with more local communities because people have family and friends,” said Addison.

The bill remains laid on the table in the House chamber.

The Senate Appropriations Committee moved forward with a similar bill, SB 1808, on Monday, sparking more concerns for the future of immigration into Florida, where one in five residents were born in another country.

The general bill intends to revise the term “sanctuary policy” in order to ban law enforcement agencies from providing certain immigration information to a state entity.