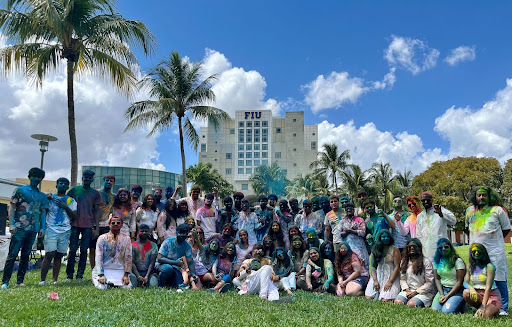 Choruses of “happy Holi!” and laughter decorated the air on the Graham Center lawn on Sunday as FIU students gathered to celebrate Holi, the Hindu festival that welcomes spring. It was organized by the Indian Cultural Club and open to all students.

Known for its vibrant colors, Holi is a celebration of friendship, forgiveness, and the triumph of good over evil. People in India flood the streets with color powder called gulal, throwing it in the air and smearing it on each other’s faces with affection. The colors are accompanied by music, dancing and throwing water.

“This is a festival where you don’t have any boundaries, really anyone can come and play,” said Sriram Tummala, president of the Indian Cultural Club. The club was inactive for two years because of Covid, but made a comeback this semester. The board spent about a month putting together the event, making sure that everyone that came had fun. Around fifty people attended.

Most people were dressed in white, but it wasn’t long after arriving that their clothes transformed into a canvas of a mix of colors. Each one has a meaning. For example, green means new beginnings. The color most strongly associated with Holi is pink, which signifies compassion.

“Playing with colors is what hypes the event up,” said Tummala.

Holi is also known as the Festival of Love, Festival of Spring, and Festival of Color, and it is one of India’s largest festivals. Though it has religious significance, it is a celebration for everyone.

Anura Sharma says that the festival unites people. “In India, people of different religions, different cultures come together,” he said.

The meeting of cultures is also part of FIU. Anahis Ruiz is Cuban, and she was celebrating Holi for the first time. She didn’t know anything about the festival before her friends, who are members of the Indian Cultural Club, told her about it. Her favorite part is the message of love it sends, making note of the positivity in the air.

Divya Teltumbade, secretary of Indian Cultural Club, said that Holi is “a reason to celebrate colors, spring and life in general.”

Students came together for a meaningful event where they got to enjoy each other’s company and celebrate the new beginnings presented by life. The music, dancing, and laughter only added to the fun of the afternoon.

Instagram Caption: Known for its colors and infectious joy, Holi is one of India’s most popular festivals. FIU’s Indian Cultural Club brought Holi to Miami for an afternoon of music, dancing, and celebrating with friends. Tap the link in bio to read more about the lively event!