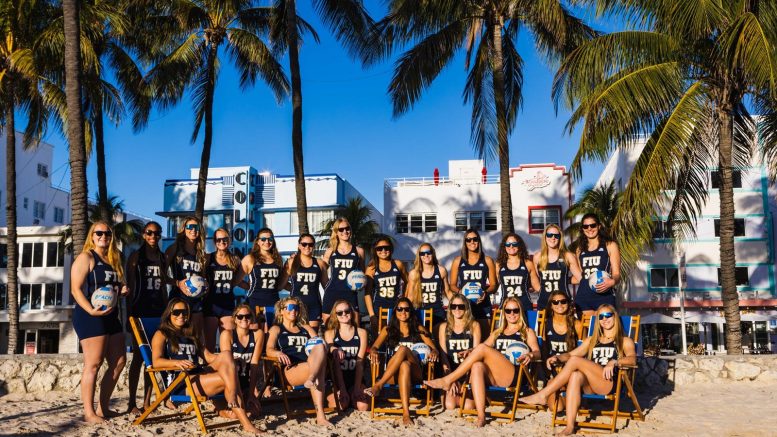 Life’s a beach and FIU Beach Volleyball loves playing in the sand, finishing the season with a record of 22-11, alongside a 4-1 record in Conference USA play.

The Panthers came into the season ranked 16th, for the 10th straight time, in the American Volleyball Coaches Association(AVCA) poll that was announced in mid February.

The beach volleyball team continued to rise up in the rankings as the seasons went on, finishing as the 13th best team in the nation. The Panthers continued to win consistently and showed that they were here to make some noise, finishing with a winning record for the ninth straight year.

FIU’s regular season performance earned them the second seed in the Conference USA Beach Volleyball Championship. After four tournament victories the Blue and Gold beat no. 1 seeded FAU 3-2 in the semifinals of the tournament, but fell short in the championship match against no. 3 seeded Georgia State, losing 3-0.

Although the Panthers did not come back to South Florida with the championship trophy they coveted, they ended the season on a positive note with players being selected for national and conference awards.

At the finale of the Conference USA Volleyball Championship, a group of Panther pairs were named to the C-USA All-Tournament team for their play in the tournament. Sophomore’s Giada Bianchi and Paige Kalkhoff alongside Freshman Lisa Luini and Kendall Mather received honors.

The AVCA announced the 2022 class of Top Flight awards winners after the conclusion of the season and in order to be eligible for the awards, a pairing must compete in at least 15 matches and win 75% of them, meaning members of the FIU Beach team qualified.

The Panthers who received recognition from the AVCA were Bianchi and Kalkhoff, receiving Flight 1 honors, while Freshman Luini and Mather were named to Flight 5. Bianchi and Kelkhoff were also named All-Americans by the AVCA and earned All-Conference USA Honors. Luini and Mather took home C-USA All-freshman team honors for their prestigious play as a pairing throughout the season.

The beach volleyball team looks to retain most of their players next season, with Luini, Bianchi, Kalkhoff, and Mather all set to return after the four award winners had tremendous play this year.

The team will begin to work during the offseason to bring a C-USA Conference championship back to Miami and make a run into the NCAA tournament.