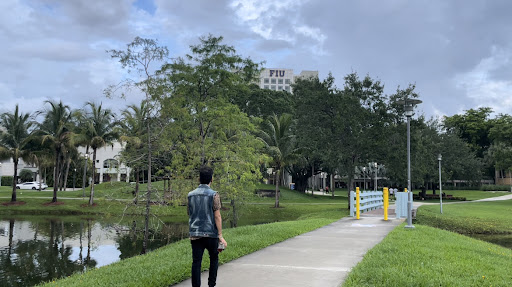 Every day at 4 a.m., FIU alumnus Lukas Alzate clocks in as the associate producer of one of Hispanic America’s biggest morning shows, Univision’s Despierta América. He fulfills his passion to inform the community, something he found through the university’s journalism program.

Despierta América is an American Spanish-language morning television that airs on weekdays from 7-11 a.m., providing the Hispanic audience with news and entertainment.

Not only does Alzate work during the weekdays for Despierta América, focusing on daily news, but also the weekend for the show’s extension, Despierta América en Domingo, working more with entertainment.

“So it’s a balance between stories about famous people and stories about characters that have an interesting story to tell,” said Alzate.

Alzate is responsible for producing the shows’ news segments, graphics, format and stories, as well as assisting the line producer and pitching ideas to his executive director.

The morning show is a hub for the Hispanic community that wants to be more informed on U.S. and world politics, without the language barrier.

An immigrant himself, Alzate who’s originally from Bogotá, Colombia, moved to Florida when he was 11 years old.

His interest in covering social and political issues was sparked when he started off as an international relations major at FIU but later switched to journalism to become a multimedia journalist. In December 2021, he graduated with his master’s degree in Global Strategic Communications.

During his time at FIU, Alzate was a DJ back in 2017 for the student radio station, The Roar.

His radio show “Música Ligera” was hosted on Mondays from 8-9 p.m., where he played a mix of rock, punk rock, and Latin rock music. Alzate continued as an entertainment journalist at the South Florida News Service, now known as the South Florida Media Network, where he’d interview local Miami music artists in his podcast “The Scene and Sound.”

Later, he had the opportunity to work for W Radio Colombia in 2019, alongside notable Colombian radio personality, Julio Sanchez Cristo and Miami correspondent Ana Vargas. Alzate was a producer for entertainment and politics for the show, where he gained more interest in broadcast production.

“It was a really good experience, especially since I admired that radio station since I was little,” said Alzate. “It was a privilege to work for them.”

In 2020, he joined the National Association of Hispanic Journalists FIU chapter and soon became its secretary. At a conference, he was offered the chance to apply for Univision and was then given a job as associate producer of the news show, Edición Digital.

Luz Maria Doria, the executive producer of Despierta América, gave Alzate the opportunity to join the morning show after admiring his work with Edición Digital.

“She’s like basically my mentor when it comes down to television… I’m super thankful for her for giving me this opportunity,” Alzate said.

He found that his most significant project for Despierta América was the coverage of the 2020 U.S. elections, where he got to experience breaking news, the voting process in the Hispanic community and how a news network handles the democratic process.

“It has helped me build myself as a journalist and as a producer. So Despierta América has been my biggest accomplishment,” he said.

“It’s a pleasure to know that you’re doing a great job of showing society what really is going on in the world.”

He emphasizes that the key to opportunities in the journalism field is to keep making important connections. Alzate refers to Luz Maria Doria as the most impactful person in his career.

“The best part of my job is always waking up and knowing that I’m going to work with professional people, nice people, kind people that are creative, that know their news, know their information and how they can bring it all to life during the live show.”

Because of his passion for film photography, radio, or news production, he became an important part of the team that puts the pieces together to create these stories for people.

“Working behind the scenes gives me a special view of how everything works, how everything gets built, from production to direction, to reporting. And seeing it all come together is very fascinating,” Alzate said.

As a Latino journalist and FIU alumnus, the advice Alzate gives current students is to be creative, be different and start networking.