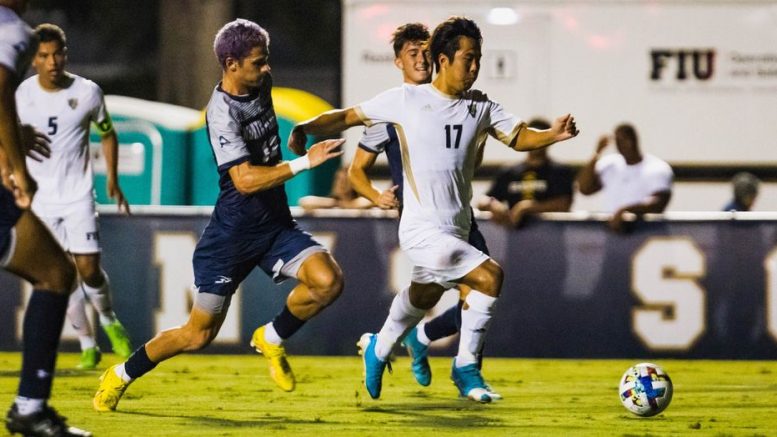 FIU Men’s Soccer claim another victory on home ground, defeating the University of Alabama at Birmingham Blazers 2-1 on Oct. 22.

The unusually chilly evening gave fans and players in the FIU Soccer Stadium an exciting game against the Blazers.

The game began with strong defense from the Panthers. In the third minute forward Fumiya Shiraishi scored the opening goal with an assist from midfielder Yushi Nagao.

The Panthers kept applying pressure, sending several shots at goal within the first 15 minutes of the game, Shiraishi, and forwards Bernardo Dos Santos, and Stephen Afrifa all sent attempts at goal.

The cheers from the stands grew as Dos Santos passed the ball to Afrifa who fired a shot off the top of the crossbar and into the net in the ninth minute.

Nagao went for a goal in minute 29, but it was wide left. Three minutes later, Dos Santos danced on the ball and kicked it, but the Blazer’s goalie saved it.

Midfielder Matteo Gasperoni was blocked from scoring a goal during minute 51, and Spanish defender David Garcia connected on a header, but it was aimed too high for a goal.

The Blazers kept fighting and eventually scored a goal in minute 64, making the score 2-1.

Dos Santos snapped back with another shot at goal, but it was saved by the Blazer’s goalkeeper again. Only a minute after the move from Dos Santos, Afrifa attempted another header to bring back the two goal advantage, but it was aimed too high.

Before the second half came to an end, Dos Santos had one more unsuccessful attempt at goal, and Afrifa had two.

The game ended on an attempt to tie the game from the Blazers, but FIU’s goalkeeper Kevin Harr saved the ball.

The Panthers secured the first win since Oct. 5 against Temple, and their current record is 8-4-1. Only three more games remain until the end of the season, two of which will be hosted at the FIU Soccer Stadium.

FIU Men’s Soccer team is scheduled to play on Oct. 25 in a home game at the FIU Soccer Stadium against FGCU at 7 p.m.