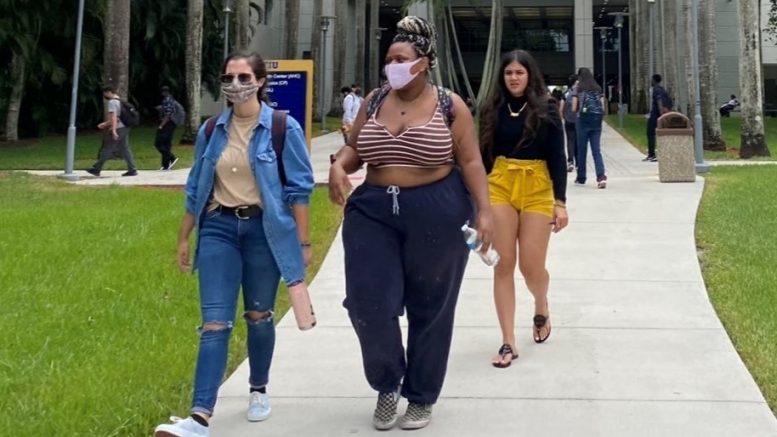 Florida Gov. Ron DeSantis’ ban on mask mandates in Florida public schools was found unconstitutional on Aug. 27 by a Leon County judge. A week later, the District Court of Appeals reinstated the ban.

The order also allowed the state to withhold federal funds from schools who imposed mask requirements.

“To some persons, power is intoxicating and its exercise addictive even when not beneficial to the body of politics,” said Thomas Breslin, an FIU professor of politics and international relations.

Dozens of parents across the state filed lawsuits against DeSantis since the ban. Some believed he abused his authority and put students at risk, according to reports by WLRN.

John Cooper, the Leon County Judge who struck down DeSantis’ order in August, called the ban unconstitutional. He said the DeSantis administration violated the rule of law by not allowing schools to require mask wearing.

Cooper wrote the Center for Disease Control and Prevention’s mask mandates are “reasonable and consistent with the best scientific and medical opinion in this country,” in a statement.

Following the ruling, Cooper said he would issue an injunction to prevent DeSantis’ administration from pursuing legal action against school districts who choose to enforce masks.

A spokesperson for DeSantis’ office claimed the judge made the ruling based on false claims.

“This ruling was made with incoherent justifications, not based in science and facts – frankly not even remotely focused on the merits of the case presented,” said the spokesperson.

Cooper defended his decision during a hearing on Sept. 8.

“If you look at my record, it’s not somebody who runs all over the place, ruling against the governor, it is a record of somebody who tries to figure out what the law is and rule according to the law,” said Cooper. “Because that’s my job.”

The decision came after a three-judge panel said they had serious doubts about the strength of the parent-led lawsuits against DeSantis’ ban.

“We have serious doubts about standing and jurisdiction matters,” wrote the court.

This means state schools that require masks are still at risk of losing funds.

Funds equivalent to a school board members’ salary were withheld from schools in Alachua and Broward County. They are not able to directly withhold employee paychecks because the state does not pay school salaries.

Most recently, DeSantis appointed Dr. Joseph Ladapo – who has an anti-vaxx and anti-mask history – as the new state surgeon general.

“The state should be promoting good health,” said Ladapo in a press conference. “Vaccination is not the only path to that. It has been treated almost as a religion. That is just senseless.”

As surgeon general, the physician and researcher will serve as the chief administrator of Florida’s Department of Health (FDOH) and advocate for disease prevention, according to the FDOH statement of agency document.

Following the events, Breslin doubted the legitimacy of the state’s efforts to slow the spread of COVID-19, which has killed over 51,000 people to date, according to Worldometer, a COVID-19 data tracker.

“About the governor’s efforts to ban mask mandates, perhaps the [Miami] Herald will title an editorial, “DeSantis fights for the right to make our young children and grandchildren sick,” said Breslin.

How the Pandemic Has Changed Me: A 2020s Frame of Mind

How The Pandemic Could Change Dating Forever

Florida Is Reopening, But A Normal Fall Semester Remains Unlikely

My Wish for the New Year: A Russian Tradition