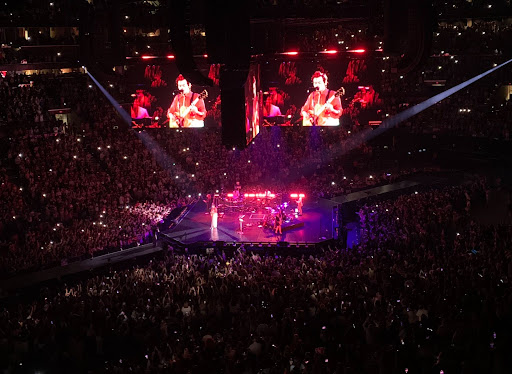 “Style is the answer to everything… to do a dangerous thing with style is what I call art.” These lines from a Charles Bukowski poem accompanied by music are the last thing the audience hears right before Harry Styles hits the stage oozing coolness and clad in rockstar glamour. Styles is the embodiment of art.

The British singer finally gets to tour his album “Fine Line” after almost two years since its release. Originally scheduled for the summer of 2020, “Harry Styles: Love On Tour” was postponed due to the pandemic. With added precautions, the tour was rescheduled for 2021. After much waiting, I attended Styles’ concert on Oct. 8, 2021.

In general, concerts are fun events where you get to listen to the music of an artist you like and spend time with people you enjoy. A Harry Styles concert goes beyond that traditional experience. It is a pinnacle of fashion, music, and as the name suggests, love.

Styles has secured his place in the music industry as a skilled musician and performer, and has also simultaneously assured a respectable position in the fashion world. From hosting the 2019 Met Gala to being the first man on the cover of American Vogue (in a dress, at that), Styles has earned a reputation for his unique and distinctive style.

Knowing this, it’s easy to understand how the venue transforms into a runway for his fans. Glitter suits, boas, and cowboy hats are abundant in the crowd. It’s easy to have a good time when everyone around you is as dressed up as you are for an event you’re all pouring your love into.

Styles’ set opens with an edit of his song “Golden” and the poem “Style” by Charles Bukowski playing on the speakers and an animation on the monitors. After about 30 seconds, the band begins to play “Golden” live and Styles, in all his musical and fashionable magnificence, appears on stage.

“My name is Harry!” he says after the first couple of songs. I saw Styles on his “Live on Tour” tour in 2018, and he introduced himself then the same way he did now. There is no need to introduce himself, everyone there knows who he is, but it shows his humility even with the level of celebrity he has.

Styles has an impeccable command of the stage. He sings, dances and runs on the entire space of the platform, making sure that the whole audience gets a satisfying and complete performance. There was not one bad seat in the arena because Styles made it so.

In addition to the stellar vocals and all-out dancing, Styles dedicates a part of the show to interacting with fans. He picks a few from the crowd to talk to and crack jokes with.

He sang one fan happy birthday, and mocked another one for her sign that said “it’s my birthday” only to admit that her birthday was in June.

It’s clear that he loves this part of the show, I suspect because it makes him feel closer to the people that make his dream career a reality. “Things like this don’t happen to people like me,” he tells us while thanking us for our support.

I went to the concert expecting to be the most moved by the song “Fine Line,” but I was actually most moved by “Sign of the Times.”

I saw him perform it in the 2018 concert, which is why I think it emotionally stunted me more. Hearing the lyrics after going through such a historically important event, not to mention mentally and emotionally impactful, gives the song a new meaning.

“Remember everything will be alright” sounds like a lullaby. I could feel in the air that everyone in the arena felt comforted and reassured. We’ll be alright. Love will save us.