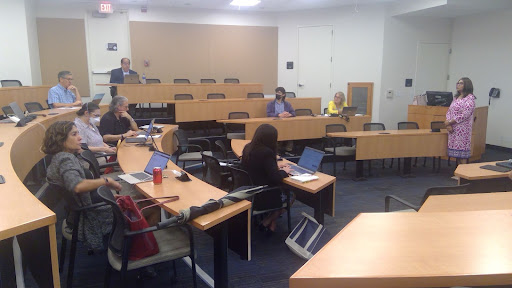 A contentious document presented to the Faculty Senate at the Sep 20 meeting could mark yet another attempt by Tallahassee to further regulate the state’s higher education system after several pieces of legislation have passed in recent years.

The meeting included lengthy discussions on campus safety, the search for the university’s sixth president and accolades achieved in the 50 years FIU has been operational.

However, the biggest issue was the numerous questions and concerns raised over a new post-tenure review policy proposed by the state Board of Governors.

Should it pass a vote during the next BOG session on Nov 9, it would require the board of trustees of each state university to adopt policies to review already-tenured faculty “in the fifth year following the last promotion or last comprehensive review.”

Universities would be tasked with basing reviews on factors such as accomplishment and productivity with research, teaching and administrative work, professionalism, compliance with state laws, BOG regulations and university policies and student complaints.

Most notably, the draft regulation includes a section that mentions “biased teaching, instruction or indoctrination constituting discrimination under Florida law” as criteria considered in the review process.

During the 2021 state legislative session, a law signed by Gov Ron DeSantis created a student survey in an attempt to identify and ultimately stamp out “indoctrination” on university campuses.

This year’s legislative session was defined by the signing of the so-called “Stop W.O.K.E Act”, which targets the removal of what its proponents call ‘corporate wokeness’ and Critical Race Theory in public schools and universities.

The proposed scale ranks professors as exceeding, meeting or not meeting expectations, with the worst rating being “unsatisfactory”. Depending on the rating, faculty may receive additional compensation or a promotion, a plan of improvement, or a notice of termination.

The review process will go through the faculty member’s department chair, the dean of the college and Interim Provost Elizabeth Bejar, who will ultimately rate the professor with input from the university president.

In her remarks, Senate chair and BOT member Deanne Butchey addressed several concerns that were raised by senate members.

One was that post-tenure review already exists in most universities with tenure. Faculty also raised concerns over how the new policy may inhibit academic freedom and freedom of speech on campus.

“There is now a potential assault on academic freedom and first amendment rights, including freedom of speech,” Butchey said during the meeting.

Journalism professor Neil Reisner added, notably, that because the policy automatically terminates a professor who receives an “unsatisfactory” rating, it effectively nulls the concept of tenure at its core.

“If you do not pass that review, if you get an unsatisfactory rating, then you will be given notice of termination; you will be fired,” said Reisner. “What the union has to say on that is unclear, but essentially, this document  – if it’s passed – guts tenure.”

Other parts of the draft were also unclear, such as precisely what kind of “teaching, instruction or indoctrination” would constitute discrimination in the classroom.

“It also says the review shall not consider or otherwise discriminate based on the faculty members’ political or ideological viewpoint,” added Butchey. “[There is] obviously a discrepancy in those two sentences.”

The draft’s ambiguity has left many faculty senators concerned that the tenure review could be easily abused by administrators.

“There’s a lack of clarity about whose criteria are going to be applied for post-tenure evaluation,” said Library Senator Patricia Pereira-Pujol. “I think that there is important work to be done to clarify whether or not the criteria being used is the same that we use to promote people, or if there are new criteria for productivity that will be applied.”

Other concerns of clarity in the document related to the review’s likely timetable.

“Each tenured faculty member should have a comprehensive post-annual review in the fifth year following the last promotion or the last comprehensive review, which is whichever is later,” said Butchey. “So the question may be, ‘does this mean that only four years of data will be reviewed?’”

The draft follows up by stating that final decisions on a faculty member’s tenure can be appealed, but that appeals can only be based on a violation of university regulations or active collective bargaining agreements with the faculty union, the United Faculty of Florida.

Further, the arbitrator won’t be allowed to consider appeal claims based on equity or substitute their judgments for that of the university.

Butchey also pointed out that the proposed regulation would require more oversight from administration, making it difficult to recruit department chairs and other administrative staff.

However, she did mention a possible benefit should the proposal be accepted.

“Based on conversations that I’ve had, a positive observation is there is an implication that there will be compensation associated with passing the review,” said Butchey. “So this suggests that UFF chapters should be able to make recommendations on compensation during bargaining sessions.”

While senators kept their comments limited during Butchey’s remarks, the last few minutes of the meeting became somewhat heated over the subject of freedom of speech within the senate.

Jeniffer Abeloff of FIU’s school of social work brought up her concerns about Butchey’s previous cautions relating to what professors say in and out of senate.

“At the last faculty senate meeting, and then at this one, you talked about in your report that we have to abide by the law of elected officials and we can educate – but supported by undisputed data,” said Abeloff. “Where’s this coming from? What are we referring to? Because I’ve never heard anything like this.”

Butchey, who is also on the Board of Trustees, connected it to state laws surrounding the expression of political views by faculty on campus.

“But I think we have to recognize that we are part of the state university system and we do have laws, whether we like them or not, that we have to adhere to, and I think that is the only reason why I have repeated this a bit,” said Butchey.

She also encouraged faculty to use available forums of expression outside of FIU.

“You know that I’ve been a very strong proponent of the union over the years, where there’s a lot more freedom to say the things that we need to say without being on the FIU surface and things like that,” she said. “And that’s the only reason I mentioned that because anything political can be used to imply things that we may not be, as we all know.”

Butchey and Abeloff continued their own discussion in hushed yet heated tones after the senate had adjourned.

With the delays in BOG voting, an opportunity remains for the draft policy clarified and improved in the coming weeks.

“I encourage the faculty to continue monitoring this situation and send feedback or comments to me,” Butchey said.