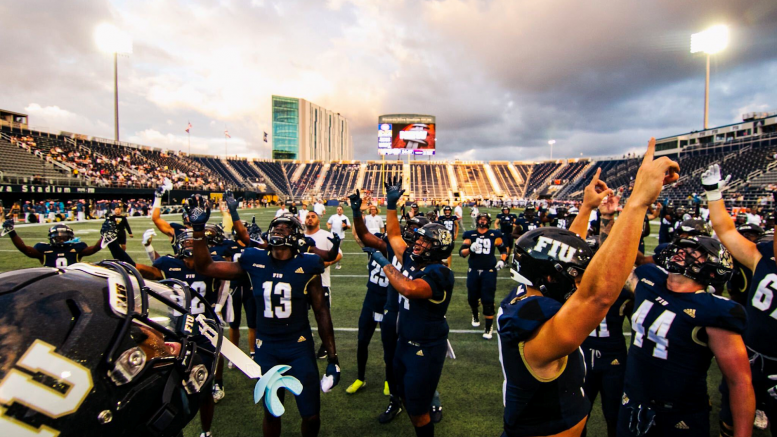 FIU Football team in a pre-game huddle before taking on UConn, Photo by FIU Athletics

After a devastating 33-12 homecoming loss to the UConn Huskies, FIU looks to bring back momentum in a second straight home game against the 2021 C-USA West champs, the UTSA Roadrunners.

The Roadrunners come into the game as the number one team in C-USA this year. With a 2-0 conference record and a near defeat of No.21 Texas earlier in the year, UTSA is going to be one of FIU’s toughest challenges yet.

UTSA has a star at QB in Frank Harris, who is completing just below 70% of his passes and is over 2,000 passing yards. Harris is on track to beat his career high of 3,200 passing yards in a single season. He’s thrown 13 touchdowns with just 5 interceptions this season, rushing for 5 of them.

As electric as he is in passing, he can also scramble. Harris showed his skills against WKU as he threw for one touchdown and rushed for another, accumulating 254 yards on the run in just 52 rushing attempts this season. The Panthers need to slow him down if they want any chance at winning.

The game moves through the QB, and as good as wide receivers Tyrese Chambers and Jalen Bracey are, they’ll have no work to show for it if quarterback Grayson James and the offensive line are not in sync.

The offensive line looked like bowl game contenders just two weeks ago against New Mexico State, but a week later crumbled against UConn, allowing two sacks a game with four tackles for loss. Everything seemed to be on the come up for this young FIU team, but last week’s game was a major step back for what many believed to be a manageable game.

UTSA is no walk in the park, and FIU knows what they need to do to not let UTSA take control. Unfortunately, they failed to do so against WKU, and costly mistakes against UConn had them trailing 20-0 at halftime.

FIU takes on UTSA this Friday at 8PM at the Ricardo Silva Stadium, and streaming on CBS Sports Network.