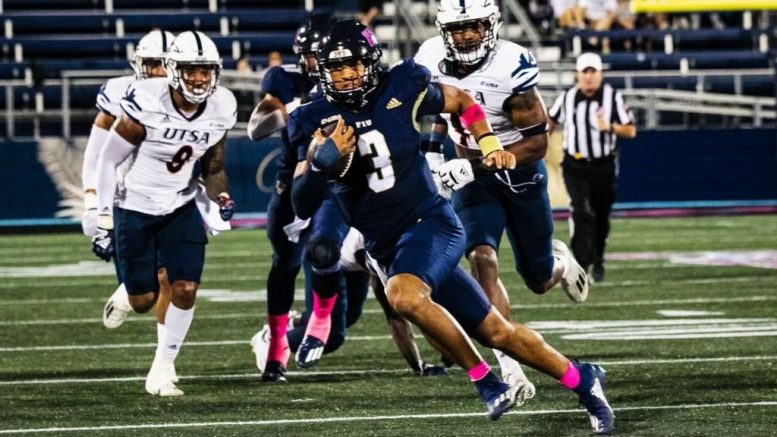 On a vice-themed night at Ricardo Silva Stadium, the FIU football team was looking to make a statement against the reigning C-USA champion UTSA Roadrunners. However, a slow offensive night resulted in a 30-10 loss on Friday night for the Panthers.

Panthers head coach Mike MacIntyre emphasized the “fight” from his team, especially in the first quarter.

The Panthers’ offense came out to start the game. Quarterback Grayson James marched the team downfield on a 14-play, 57-yd drive, eventually stalled by a missed 41-yd field goal from kicker Chase Gabriel.

However, the FIU defense showed their grit, holding the high-powered UTSA offense led by quarterback Frank Harris to no points in the first 17 minutes of the ballgame. The Roadrunners finally broke through early in the second, leading 3-0.

“We watch the film each week, and you can see areas that we improve, I thought tonight they kind of kept their fight,” MacIntyre said postgame about his squad.

After the field goal, the Roadrunners found their rhythm, scoring on consecutive drives with two touchdown passes from Harris, making it a 17-3 score entering the half.

Harris, the nation’s passing leader, went 10-for-15 on 145 passing yards with two touchdowns in the second quarter alone.

“Harris is a Houdini quarterback; he does some things, he makes plays, makes throws. He is an excellent player,” MacIntyre said postgame.

In the second half, down 14, FIU needed to find a rhythm on offense. It proved difficult for Grayson James, only throwing for 70 yards without any score as FIU left the third down 24-3 with UTSA adding on another touchdown.

After UTSA running back Kevorian Barnes, who had a career night of 128 rushing yards on 20 attempt, rushed for his second touchdown of the game to begin the fourth,  Panthers quarterback Haden Carlson was brought in for the third time this season.

He helped lead a nine-play, 70-yard drive that finished with a 15-yd touchdown run from running back Kejon Owens, his first FIU score, to make it 30-10 and end the ballgame.

One positive for the FIU offense was running back Lexington Joseph. He had six carries for 56 yards and a 35-yd long run.

“It’s coming together right,” Joseph said. “As you can see we are making progress from last year so we’re getting better and better each week.”

On the defensive side of the ball, Panthers linebacker Gaethan Bernadel had a career night with 15 tackles, which brings him to a total of 52 tackles this season.

“It gave us tremendous confidence you know, to go out and play toe to toe with the best team in conference, it’s really a big confidence booster for us,” Bernadel said.

FIU hits the road once again for a matchup against the Charlotte 49ers on Saturday, Oct 22. Kickoff from Jerry Richardson Stadium is set for 3:30 pm and can be streamed on ESPN3.